Home › Censoring of truth › How Stupid Does Omar Think Americans Are?

How Stupid Does Omar Think Americans Are? 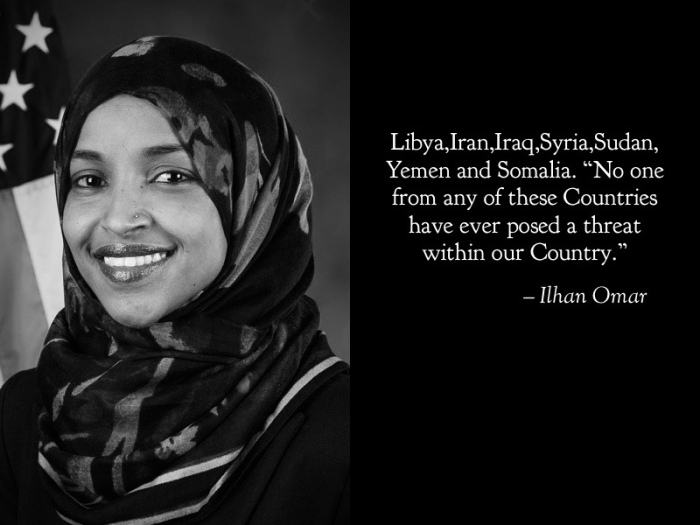 Just how stupid does she think Americans are? Her and the squad leading the Dems have portrayed Americans as idiots. Yes they have. The whole Russian investigation into meddling with our election includes fake facebook accounts that give fake news or leaks about the Democrat party. It’s as if they think Americans are gullible and that is a fact as evidenced by the green new deal they are pushing and other agenda’s. More and more are waking up to the fact that they issue false statements and then swear to it to give it credence. And whole populations are swallowing it hook line and sinker.
This is a commentary on Omar’s rants not a word for word, but you can watch the video in question here.
Omar’s latest comes from an old interview shortly after she was elected by Al Jazeera. Marco Rubio shared a portion of that video and immediately came under attack by her stating that he took excerpts out of context. Excerpts like “we need to fear white men more than anything.”

Well I went to the original video to see if this was taken out of context, and to tell the truth, the entire interview was worse than the editing excerpt. You can see for yourself in the above link.

No where in this interview was the words “white supremacists” mentioned. Only “White Men”. She really did say we needed to fear white men and they had killed more here than Islam. While I agree white supremacist’s are terrorists and should be designated as such. Her statements are outrageous and racist. She also said in reference to the travel ban by Trump, that Trump was a racist and that noone from the list of countries on his travel ban posed a threat within our country. This is the crazy part. The part where she thinks we will believe anything she tells us. She quotes the same statements that Al-Queda, ISIS and the others quote to radicalize men and women to their cause like America’s failures of foreign policy and racism against Muslims, and she touts it as freedom of speech. Her accusations against America must stop. Her hatred of American values must stop. She said fear is what drives us, well I have news for her. I fear no man, I don’t fear Islam, therefore have no phobia, I don’t fear women as a whole, just those dangerous in heart, I don’t fear anything. Common sense tells us that we don’t leave the back door or a window open in our house for thieves to come in. We don’t leave the door to America open either. Come in legally after extensive vetting. Too many have come in through a window and thousands lost their lives in 911. The attacks by Islamic ideology in this country are in the hundreds. These countries listed in the travel ban have long reaching arms here responsible for radicalizing huge swaths of our country. Including the Somalia population in Omar’s district. And we are simply suppose to ignore this danger because calling it out offends Omar?
I do agree with the way she described the American Dream, I don’t agree with how she made the Dream about race and racism. She never misses a beat to spew racist hate.
And Iranian Revolutionary Guards have been threatening us here with sleeper agents and threats of attacks for years. Prompting us to designate them a terrorist organization. So tell us again how no one has come from these countries to do harm.
America love it or leave it, is actually been around since 1942 and became popular in the riots and protests during the Viet Nam war. I happen to agree with this statement. Another statement that I think applies here is “Take it or leave it.” Since the prior statement offends them, this one should fit better. Because if you don’t like America or what it stands for, than take it or leave it. This discussion is over, you and the others are racist bullies and your ideologies are very dangerous for America, take it or leave it. Your about to visit Israel just remember that Israel is one of the greatest Allies America has in the Middle East, before you spew your anti-semitism there you might want to remember that a growing majority of Americans think you and the rest of the quartet need to be impeached or recalled. You do not share the ideas that our young men and women fought and died to defend. You flip your nose at our history, and our cost of our freedom. You flip your nose at our Allies and defend our enemies. And you wonder why we tell you “take it or leave it”?