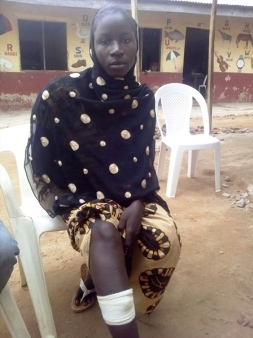 (World Watch Monitor) Mercy, a 22-year-old woman from Borno State in north-east Nigeria, was abducted in June 2014 when Boko Haram overran the small town of Gwoza where she lived. She speaks here for the first time about her five weeks in captivity, where she was forced into a marriage, made to watch multiple killings and felt compelled to submit to her captors’ demands to follow Islam.

Mercy’s town of Gwoza sits at the foot of the Mandara mountain range on Nigeria’s eastern border with Cameroon. In 2009, Boko Haram started moving into the area and setting up camp in hills next to the village.

In June 2014, members of Boko Haram overran the town and declared it an Islamic caliphate. At least 100 people were killed in the attack.

The insurgents arrived in Mercy’s neighbourhood in the middle of the night. She and her father – her mother had died 10 years before – were at home by themselves when they struck.

“Everyone in the town ran to save themselves. My dad and I were separated. I don’t know what happened to him. I think he died the same way many others died, because they refused to deny Christ,” she said.

(Earlier in 2015, World Watch Monitor heard how Boko Haram members had shot Christian men in their homes for refusing to deny their faith.)

The attackers burned down Mercy’s house before six of them marched her and four other women into the hills, where a vehicle was waiting to take them to the nearby town of Mubi, which had also fallen to the insurgents.

“All the way there they kept threatening us. They told us if we did not obey every command once we got to the camp, we would be beaten severely.” The intimidation worked. No one moved or spoke a word, Mercy said.

The “camp” consisted of a few houses close to each other. “When we got to the place, there were about 50 other women. I recognised many other Christians, who had now become Muslims and were forced to undergo Islamic teaching.”

Mercy could only guess what was in store for her. “My first day was like hell. I cried all day and all night. I prayed like never before and asked God to give me courage.”

The next morning, Mercy and the others were taken to a clearing for questioning. They were asked to become Muslims and to marry Boko Haram members.

“The four other girls were very scared and immediately agreed. I pleaded that they allow me to remain a Christian, but my pleas fell on deaf ears. They beat me and told me to never mention Christianity in the camp again. Then they told me that they would arrange a husband for me.”

From that day onwards, Mercy was forced to attend Islamic teaching along with the others.

“We were forced to attend prayers at 5am. After that, we were sent to amadrassa [Islamic school]. There was only a short break. After we were given a little food, we returned to the madrassa. They constantly told us to work hard for the advancement of Boko Haram. In the afternoon we were dispersed to do our chores, such as washing the men’s clothes.”

“I also received a husband a few weeks later,” says Mercy. She doesn’t want to give details about the arranged marriage. All she says is, “Every single day came with tears and fears for the unknown.”

One thing that Mercy cannot forget is the cruelty she was forced to watch.

“I witnessed constantly how Boko Haram members killed innocent people. Christian men who were captured and brought to the camp were killed for refusing to deny their faith. [It was like] the fulfilment of the [things written in the] Bible played out in front of my eyes, as people died for their faith in Christ. But others, including me, could not endure the torture and gave in to their demands.”

After Mercy had spent five weeks in captivity, and five days after she was married, the government stepped up its campaign to retake Mubi. For three days it engaged with the insurgents. The military also used fighter jets to bomb the area and one of the bombs landed on the house where Mercy was kept. She was the only survivor.

When the insurgents fled, government soldiers combed Mubi and found Mercy in the bombed compound with a broken leg. She was in terrible pain and crying for help. The soldiers took her to the clinic, where she received first aid.

When it was certain that Mercy would survive, she was taken to a displaced people’s camp in Yola, a city 300km from Gwoza. Many Christians fled to Yola at the height of Boko Haram activity, but Yola itself also recently became the target of a deadly attack when, on 17 November, a suicide bomber killed 34 people.

A church worker found Mercy during a visit to the camp and took her to a local clinic, where she received additional medical care for her broken leg. The church members paid for as much of the treatment as they could, and then returned her to the camp.

“I thank God for rescuing me. Many lost their lives after being forced into Islam, but I am alive today.”

The Gwoza Hills close to Mercy’s home town were turned into a no-go area, with Boko Haram increasingly using them to hide out, an anonymous source told World Watch Monitor shortly after the Nigerian government declared parts of north-east Nigeria to be in a state of emergency in May 2013.

In June 2013, the insurgents burnt down four Gwoza churches. By February 2014, half of the Christian population had fled and church services could no longer continue. Those who remained did so because they had nowhere to run or because they believed the army would be able to protect them. But on 5 June, Gwoza was turned into killing fields.

“They came in Hilux vans [often used by the Nigerian army]. We all thought they were the soldiers. They urged all of us to congregate at the centre of the village, but they began to shout ‘Allahu-Akbar, Allahu-Akbar’ [Allah is the greatest]. Then they began to fire at the people continuously for a long time, until all who had gathered were dead,” an anonymous community leader told World Watch Monitor.

The attackers pursued and shot dead those who fled into the bush. Hundreds died that day. Men and boys were singled out.

“Even nursing mothers had their male infants snatched from their backs and shot dead before their eyes,” said another community leader. The insurgents told the women to bury their dead. When they were simply too tired to continue this, the bodies were left decomposing in the streets.

The Nigerian army bombed the area to dislodge the militants, but as soon as the assault stopped the militants were back. On 5 August, Boko Haram stormed the town again at about 5pm. They had sophisticated weapons and an armoured vehicle. They massacred about 100 more people, mostly men.

“No single church has been spared. All 178 were destroyed,” the source said. “They also destroyed Christians’ houses. An estimated 40,000 Christians fled to neighbouring towns like Mubi and Chibok. Around 3,000 sought refuge in the hills. Gradually, about 2,000 escaped. Those remaining – about 1,000 people – waited for the army to rescue them, but the insurgents got to them first. They were all killed.”

Boko Haram raised its flag over Gwoza and renamed it Darul Hikma – ‘House of Wisdom’ in Arabic. Those trapped had two options: convert or die.

The insurgents were finally driven out of Gwoza in March 2015. People have begun returning to the town, but they are living among ruins.

Voice of the Persecuted is helping to support persecuted Christians in Northeast Nigeria. Together with your generous help, we can reach the goal to alleviate horrific suffering. In darkness and desperation, let us serve in love, with open arms and giving hands to provide light and hope.

Everyday, we thank God that He is working through you to care for His children and further His Kingdom! As you greatly bless others, may God continue to bless you. Thank you so much for your support. We couldn’t do it without you!
You may also send your gift to: