Home › Abortion › Remember the Aftermath of George Floyd and the Kenosha Riots? You Haven’t Seen Anything Yet

Remember the Aftermath of George Floyd and the Kenosha Riots? You Haven’t Seen Anything Yet 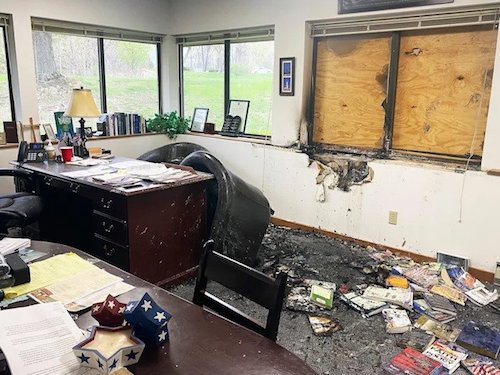 Everyone remembers Kyle Rittenhouse and George Floyd, the overturning of Roe v. Wade will be much worse

Recently Politico literally made the headlines by revealing that abortion may be overturned by the Supreme Court.  This news of course spread worldwide like a wild fire fed with copious amounts of gasoline.

The draft opinion is a full-throated, unflinching repudiation of the 1973 decision which guaranteed federal constitutional protections of abortion rights and a subsequent 1992 decision — Planned Parenthood v. Casey — that largely maintained the right. “Roe was egregiously wrong from the start,” Alito writes.

“We hold that Roe and Casey must be overruled,” he writes in the document, labeled as the “Opinion of the Court.” “It is time to heed the Constitution and return the issue of abortion to the people’s elected representatives.” (Source)

Notice the wording, specifically this part: “It is time to heed the Constitution and return the issue of abortion to the people’s elected representatives.”  Which means simply put, this is an issue for the states to decide (I would prefer abortion was illegal period with very few exceptions).  The liberals of course are in an absolute frenzy over this – even going so far as to already be conjecturing on this (elimination of abortion) leading to the overturning of the legalization of same sex marriage.

What’s worse is the predictable outcome of this ruling, which is happening even now – violence.

When the leftists and the libs can’t have their way, they trot out the highly predictable game winning (they hope) strategy – intimidation and violence.  These people behave like two-year-olds, except that they are of course far more dangerous and supposedly much more intelligent.

When are people going to learn that the leftists and their related ilk are little different than terrorist groups like Hamas and Hezbollah?  They all operate the same way, intimidation, violence, and killings.

Although Americans are in favor of overturning Roe and 11 recent polls show Americans are pro-life on abortion, abortion activists have engaged in violence, vandalism and heated protests in response to a leaked draft opinion from the U.S. Supreme Court that overturns Roe v. Wade. They hope to somehow persuade one or more Supreme Court justices to change their mind. (Source)

The right of protest is sacrosanct, but there is no such equivalent right (or any right at all) to loot, burn, destroy, intimidate, administer a beating(s), or to kill people.

“None of us are safe from the extreme anti-women and anti-L.G.B.T.Q. ideology that now dominates this court,” Sarah Kate Ellis, the president of GLAAD, said in a statement. (Source)

In other words, open season on all who oppose us.

Justice Samuel Alito has reportedly been moved to an undisclosed location for his safety.  The militant leftist group Ruth Sent Us (as in Justice Ruth Bader Ginsburg) listed online the home addresses of the five Justices that are likely to vote to overturn the Roe v. Wade decision.  It needs to be stated here in all fairness – as much as I vehemently opposed Ginsburg and her ideals, it is very unlikely she would have endorsed this group’s actions.

While doxing the justices’ home addresses is ostensibly so protesters can go to those justices’ homes to protest – which many Americans consider objectionable by itself, and in fact which violates federal law at 18 U.S.C. § 1507 – many others also note this could lead to violence, if an activist were to attack a justice or the justice’s family. (Source)

As if the issue of legality matters to these thugs, it does not.

In Wisconsin an anti-abortion office (Wisconsin Family Action) was the target of a violent and destructive attack.

The headquarters of a Wisconsin anti-abortion organization was “targeted” over the weekend in an apparent arson attack that involved a Molotov cocktail and a threatening graffiti message that read, “If abortions aren’t safe then you aren’t either,” police said. (Source)

Anything the left decides is allowable and we all need to get behind it, if that is we value our skin.  The left makes the decisions for us in all walks of life, and the rest of us whether or not we agree keep our mouths shut about it or else.  This includes giving the left a pass on their actions whatever they may be.

Sounds a lot like the way that Hitler ran Germany does it not?  Give us what we want, or we will take it by force.

Supreme Court Justice Clarence Thomas remarked that, we can’t be bullied.  Let us hope that the justices stick to that thought despite the bullying and intimidation tactics being employed.

As a society, “we are becoming addicted to wanting particular outcomes, not living with the outcomes we don’t like,” Thomas said. (Source)

Justice Clarence Thomas is wrong, again. Governments are bullying women into having government-mandated pregnancies, under threat of jail. Multiple Supreme Court Justices lied during their confirmation process about their view of #RoeVWade and stare decisis. Those are the facts. https://t.co/4kUUVpckPG

This is just plain asinine.  Government mandated pregnancies?  Seriously???  Is the government also mandating sexual intercourse – the causation of the aforementioned pregnancy(s)?  And this moron is a member of congress?  God help us.

This little gem comes to us courtesy of Briahna Joy Gray, former National Press Secretary for Bernie Sanders.  I wonder if she feels the same way about arguments against her positions?

Regardless of where anyone’s opinion falls on the possible overturning of Roe v. Wade, everyone should be able to have an opinion without being attacked.  I think the leftists are wrong on this, and so does God, but that doesn’t mean they can’t have an opinion.  It is mostly the left that attempts to shut down opposing opinion and action by the use of violence.  This is completely unacceptable.

It is never ok to use intimidation and violence to obtain the desired result – never under any circumstances.

If Roe v. Wade is overturned, I fear that there will be widespread violence like we have never seen before.  The left after all doesn’t like to lose.

Like Loading...
‹ Christ is not a “Groomer” He is not “Woke He is not a “Socialist”
Satan Is Literally Squeezing the Life Out Of America And The World ›