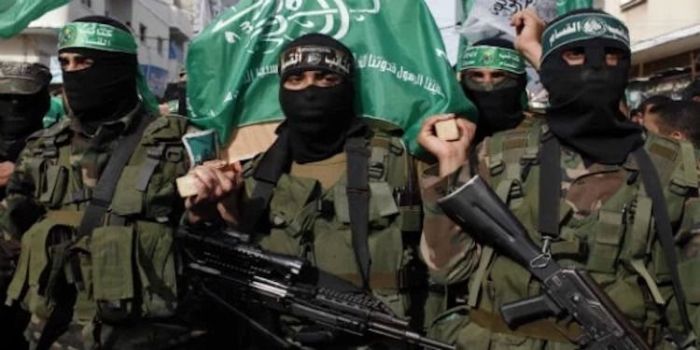 (TCP News)  Leftist fop Joe Biden actually did something right for a change; he defended Israel’s right to defend themselves against attack.  Meanwhile, other deranged Leftist Looney Tunes like the members of “The Squad” accused Israel of terrorism and demanded the U.S. cease all aid to Israel until the attacks on the Palestinians stop, calling them “human rights violations.”

The four Squad members (Alexandria Ocasio-Cortez, Ilhan Omar, Rashida Tlaib, and Ayanna Pressley) are always quick to defend Hamas and other terrorists while denouncing and defaming Israel, not to mention their own country.

The Gaza Strip is organized and controlled by the terrorist group Hamas with other terror groups adding to the problems.  Hamas can do no wrong and can attack Israel at will, but when Israel returns fire or attacks Hamas targets, they are “terrorists,” and inhumane etc.

What these House Reps. fail to mention is the brutal attacks perpetrated by Hamas and others against Israel – not to mention the fact that Hamas and other groups and nations openly claim that it is their mission to obliterate, to remove from the map – the state of Israel.

Biden stated that Israel has the right to defend itself from rocket attacks.  AOC responded with the completely ridiculous and asinine accusation that Israel is the “occupier.”

“This is not neutral language. It takes a side — the side of occupation.”

“Blanket statements like these w/ little context or acknowledgement of what precipitated this cycle of violence — namely, the expulsions of Palestinians and attacks on Al Aqsa — dehumanize Palestinians & imply the US will look the other way at human rights violations,” AOC wrote on the social media platform, adding, “It’s wrong.”

AOC fails to mention that hostilities were yet again started by the Palestinians and not the Israelis.  Israeli police responded to attacks on police and civilians by Palestinian teenagers.

On Monday, more than 300 were injured in violent clashes after authorities moved in to try and stop Palestinian youths from throwing rocks at police officers and Israeli civilians marking Jerusalem Day, a controversial holiday that celebrates Israel’s invasion of the eastern part of the city in 1967.

So let me get this straight, Israel is evicting people in a Jerusalem neighborhood (right or wrong) and these evictions along with violent confrontations with Israeli police at Al Aqsa mosque (the Temple Mount area) are justifiable grounds for Hamas to launch hundreds of missile attacks on Israel?

Hamas posted their demand for Israel to basically remove itself from the areas in question.  Two problems here, Israel was celebrating “Jerusalem Day,” (marking its capture of East Jerusalem in the 1967 Arab-Israeli war) the land(s) in question belonging to Israel.  The so-called “Palestinians” are not a real people group to begin with, and have no legal or other right to these lands whatsoever.

Demanding that Israel remove its police from Al-Aqsa and Sheikh Jarrah, Hamas, the Islamist militant group that controls Gaza, set a 6 p.m. (1500 GMT) deadline for the forces to be withdrawn.

The proper word for this isn’t “demand,” it is terrorism.  Do as we say, or else.

According to the The Times of Israel, Hamas has launched over 1000 rockets into Israel since the latest round of hostilities began on Monday.

I mentioned the earlier the brutal attacks by Hamas, their rocket attacks are launched into military areas as well as civilian areas, and no one bats an eye while calling out Israel as the “bad guy.”  Israel is also condemned for hitting residential areas in the Gaza Strip with retaliatory attacks against Hamas and Islamic Jihad.

The New York Times today (05/13/2021) posted a hit piece by author and professor of literature and creative writing at the Islamic University of Gaza, Refaat Alareer, who is a resident of Gaza.

“On Wednesday night, after two hours of nonstop bombardment and Israeli missiles raining down all over the Strip — some landing just a few hundred meters away from our building — we finally managed to catch some sleep.”

“The deafening strikes destroy Gaza’s infrastructure, cutting off roads leading to hospitals and water supplies, bringing down access to the internet [sic]. Many of the targets Israel hits have no strategic value. Israel knows this, and knows how it unnerves us. I wonder what those officers do in their command centers: Do they draw straws on which block to annihilate? Do they roll a dice?”

While I regret the loss of life, especially innocent loss of life on both sides of the conflict, this writing of Alareer’s while containing a modicum of truth is in its entirety a distinct hit piece on Israel meant to draw heavy criticism and outrage against Israel while at the same time drumming up sympathy for those in the Gaza Strip.

That being said, hold on a moment here, all is not as it seems on the face of it.

Remember, kids: America gave Israel the means to drop bombs on innocent Palestinian terrorists who purposely fire rockets at Israel from hospitals and places with no strategic value.

We have absolutely no doubt that children in Gaza are terrified, and our hearts break for them. But it’s not Israel who has stolen their childhoods and innocence.

Hamas has been known for years to hide missile launchers and other weapons in civilian areas such as hospitals, schools, homes etc.  They launch missiles; weapons intended to kill Israeli’s including in civilian areas of Israel, from these sites.  Israel warned Hamas/Gaza residents where they were going to strike.  Does Hamas do likewise?  No, they do not.  And when Israel retaliates for the hundreds of missile strikes against them, they are nailed to the wall as criminals, human rights violators, killers etc.

Me: "You leveled a [Gaza] apartment building… you think that's in line with humanitarian law?"
Israeli spokesperson: "Hamas is using the Palestinians as human shields…"
Me: "Is your position that apartment buildings are fair game?"

Where is the rightful outrage over the atrocities of Hamas and others committed against Israel?  The above tweeted video is just more of the same, justification for Hamas and others to do as they please against Israel without consequence, while Israel is soundly condemned for defending themselves against terrorist attacks.

I wonder if the Squad and those who agree with these women’s Leftist ideologies would be so quick to defend an attack against the U.S. if it was perpetrated by a party such as Hamas?