Home › censoring of Christian Conservatives › The Days Are Evil,As Our Freedoms Are Stripped One By One

The Days Are Evil,As Our Freedoms Are Stripped One By One

I haven’t written much this last week. Watching and waiting for guidance as are other watchmen and women. All that is happening in the darkness and hatred of the left in our country is indeed in Prophecy.

From Climate change(as the left has coined it ) to the coup against our President. Recent events with the President announcing withdrawal from Syria to allow Turkey to enter is at the top of the prophetic time line. Yes Turkey and Iran play a huge part.

Closer to home the takeover of our Constitutional Republic by socialists, communists, leftists,and Islamists is also prophesied. The Last beast spoken of in Revelation and even Daniel is rising rapidly. The beast represents a one world government in control of every aspect of life. On this most scholars agree. The dangerous leftist Dems are threatening our economy, our health, our food system and even what we eat. Pushing genetically modified food systems and replacing meat with plants. The high tax rates especially on the wealthy has been criticized by economists. The welfare state they want has also been criticized by economists, yet they push their agenda for complete control. Population control is at the top of their list. Without boring with facts and stats my research has shown economists agree that higher tax rates are a deterrent from businesses to strive for more, instead underperform to avoid the high tax rates. We all remember the exodus of business when taxes were increased. And most agree that welfare nanny states discourage the population from improving themselves in order to keep benefits. I’m not as eloquent as the economists but you get the idea. It’s all about control,control,control and power. God has His own agenda. He controls the climate and its changes not man. Climate change is a hoax period. Unless your a humanist like the left. And without God or the Holy Spirit to guide to understanding of course they blame us for believing in Gods control and mock us at every turn, and even attack those exposing their propaganda.

The evil order is rising and will soon be in full force. Already in place are those evil tools from the “Rules for Radicals” (the holy book of the left),like Facebook and Twitter removing our freedom of speech.

A great watchman and site “True Conservative Pundit”, was attacked this week on Facebook over a post exposing the Climate change hoax. Even controlling the number of people who see their posts. Calling it fake news and clickbait.

We are under attack. And it’s going to get worse. We must stand together. We are in a spiritual battle for the collective soul of our Country and Christ’s church.

Hillary Clinton is calling again for our “outdated”constitution to be re-written. So impeachment of Trump can happen. 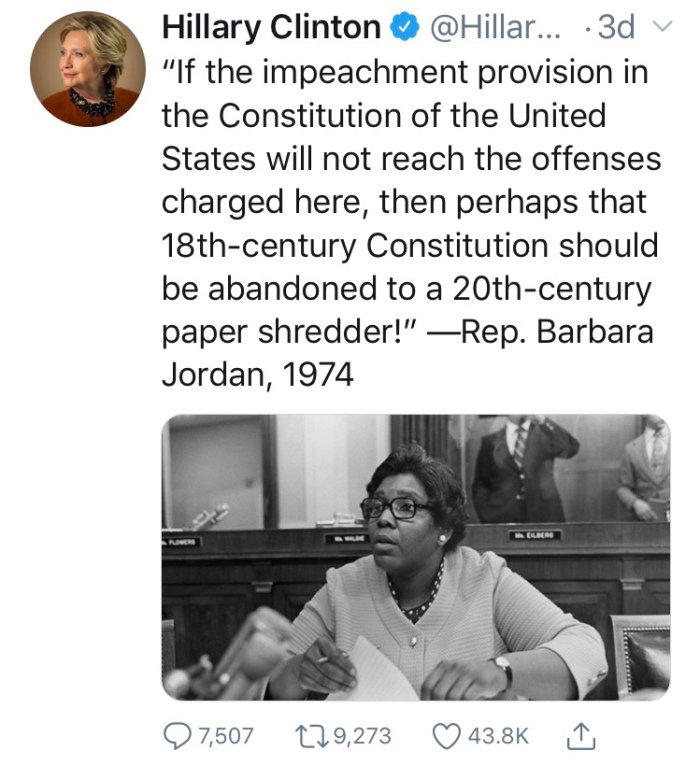 Why? Because he’s exposing their dark deeds. Barbara Jordan was a great activist in the Civil Rights movement of which I respect but for HRC to reignite her speech for impeachment, and I don’t care who you are the calling for shredding of our Constitution is wrong. It’s that same Constitution that the civil war was fought over because all men are created equal. It was the Republicans who stood by this and freed the slaves. Say what you want. God has been with our Country from its inception and to kick Him out now is abominable in His sight.

God have mercy. It’s coming. God is about to give America the desires of the heart of darkness.

20 Woe unto them that call evil good, and good evil; that put darkness for light, and light for darkness; that put bitter for sweet, and sweet for bitter!

And have no fellowship with the unfruitful works of darkness, but rather reprove them.

12 For it is a shame even to speak of those things which are done of them in secret.

13 But all things that are reproved are made manifest by the light: for whatsoever doth make manifest is light.

14 Wherefore he saith, Awake thou that sleepest, and arise from the dead, and Christ shall give thee light.

15 See then that ye walk circumspectly, not as fools, but as wise,

16 Redeeming the time, because the days are evil.

17 Wherefore be ye not unwise, but understanding what the will of the Lord is.

Like Loading...
‹ Hollywood’s Trump Derangement Syndrome is Off the Charts – the Return of the Queen – Mini AOC, She’s Baaaaaack!
Tearing Down The Sanctity Of The Church ›