Home › attacks on Christianity › No, Ilhan Omar,Christ Is Not Palestinian

No, Ilhan Omar,Christ Is Not Palestinian

It seems Ilhan Omar has set her primary goal as offending and humiliating Christians. Which should come as no surprise since her primary supporter is Louis Farahkan and the NOI. Along with Muslim brotherhood and Hamas supporters CAIR. And it’s not only because she is a Muslim woman but because she is a Muslim woman who clearly exhibits disdain for Jews and Christians as evidenced by her tweets and speeches. ( More) Clearly violating America’s values and allies. She is not the first Muslim in Congress but she is one of the first along with Tlaib and socialist Cortez to spew clear antisemitism and disdain for Christians. AOC even saying aide should be reduced to Israel, our greatest ally in the ME.

Her latest is declaring Jesus Christ a Palestinian.

It’s not because she said Christ was dark skinned. But because of her latest tweet, that she retweeted. On Easter no less. 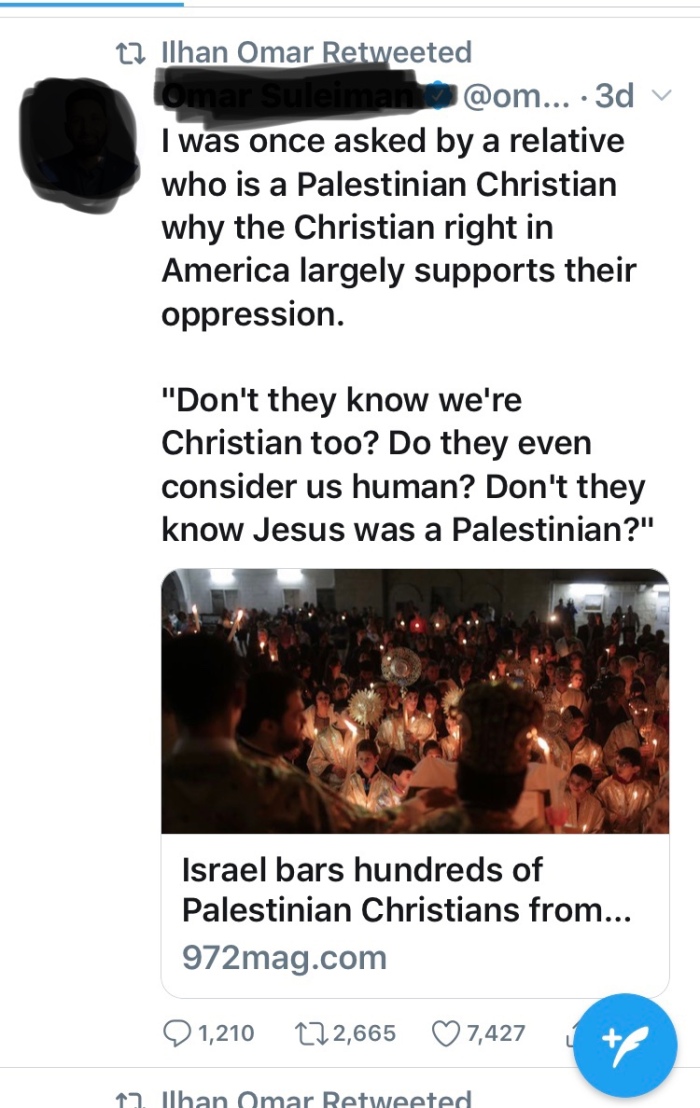 In the first place, Israel’s move to offer travel by permits only to Palestinian Christians is not unprecedented. They have been doing this since the intifadas killing Jews. And Yasser Arafat was the first to declare Jesus was a Palestinian refugee. And you know the rest of the story or you should.

Why do you think God goes into such great detail about the Cananites or David and Goliath or here’s the big one, the genealogy of Christ?!

Wake up! Christ was a Jew. He was known as coming from Bethlehem and returned to Nazareth after fleeing to Egypt from Herod and known also as the Nazarene. He is also known as King that’s why Herod wanted him dead and satan tried so hard to stop His mission and is still trying today through these that spew these lies and blasphemies.

I have one last statement in the form of a question. If Ilhan Omar is promoting quotes that originate with Yasser Arafat or the NOI why is she still in Congress while loyalties are clearly not American?

Keep our brethren in Palestine in your prayers. Pray for Israel.

I AM NOT ASHAMED OF THE GOSPEL OF CHRIST

Like Loading...
‹ Watchmen’s Warnings Fall On Deaf Ears
Author’s New Book Examines the Spiritual Darkness That is Destroying America and the Church ›