The left’s hatred and propaganda grows by the hour. Fomenting Hate,bigotry and division is the New Democratic party’s mantra. They are so proud of the three new female leaders, but if you analyze what they say and how they say it something sounds eerily familiar. I couldn’t quite bring it together at first. We knew it was vile and we know they had a deep resentment even hatred for Americans,but now we know from whence it comes.

After reading a new report about a 2017 tweet from Omar when she was in the Minnesota state house. It became abundantly clear. Is She and the other 2 using the same propaganda ISIS uses to radicalize?

I think they are. It took a bit but I finally found proof. You hear everyday about the satan (America and the West) and how the West will be punished for killing in Iraq and Syria. Well here is the tweet where Omar twisted the events of what has become known as Black Hawk down(Mogadishu). A horrific attack on our troops attempting to act on a UN mandate to remove an evil dictator refusing aide to his people. The world watched in horror as our helicopter was shot down and our troops killed and drug through the streets of Mogadishu. She said they are the ones that killed thousands of innocents, completely ignoring the truth and fomenting hatred for America. Even using a hash tag invoking the name Iran and islamists have given America,#not todaysatan.

From Fox News: In the October 2017 tweet discovered by journalist John Rossamando, Omar was responding to a Twitter user who’d highlighted that more than a dozen U.S. soldiers were killed and another 73 were wounded in the Battle of Mogadishu, saying it was the “worst terrorist attack in Somalia history.”

“Omar, a Somali refugee who was then a Minnesota state representative, refuted the tweet, insisting that “thousands” of Somalis were killed by American forces.”

So this turned a light in my head and knew immediately why their rhetoric was so familiar. It’s the same hate filled rhetoric we’ve heard since 911. The justification for the slaughter of innocents by those who hate us. Here is what I found on the rhetoric used to recruit by ISIS. It’s from our Government.

ISIS uses for its recruiting strategy.” These include:

And yet the people are oblivious to the warning signs.

ISIS has now claimed responsibility for the slaughter of Christians on Sunday in Churches in SriLanka. And no condemnation in fact even Obama can’t call them Christians. Note he also referred to Notre Dame the way Omar did. And Clinton said as many faiths worshipped on Easter. Really? Many faiths? 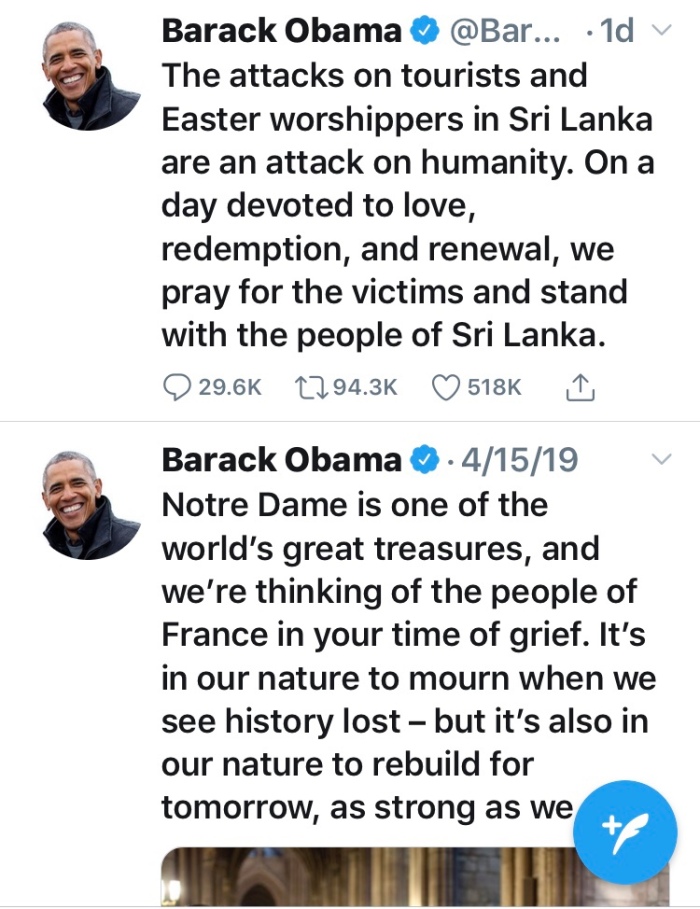 It was Christians, and all democrats followed their choice of words. Refusing to say Islamists yet again slaughtered Christians. Europe has had at least 1,000 attacks on Christian churches this year according to reports ignored by Democrat owned MSM. The genocide continues in the name of Islam and still they are silent.

But if they do not listen, they perish by the sword and die without knowledge.

The lips of the righteous feed many,

but fools die for lack of sense.

My people are destroyed for lack of knowledge;……

It’s simple God said put no other Gods before me yet we have no knowledge of that as we have been dumbed down in the arena of diversity,tolerance and idols. Remember we wrestle not with flesh and blood but principalities of the spirit world.

My mind keeps going back to something I read right after 911. A Jewish man was in a store in New York as the attacks happened. And he said America will never win this war until she understands what she is fighting.

Truer words never spoken. God has given us many warning signs and time to turn back. And just as in ancient times he’s turning us over to our enemies. Because we refuse to accept the truth. The call from God to quote “Make America Godly again. “. Warnings in Revelation come to mind and the call from the Altar that says “your judgements are just and true!”(Revelation 16:7)

I am not advocating violence or hatred for them but it’s time to wake up. Time to prepare to accept nothing but the truth, remember Christ said the great deception and AntiChrist would deceive even the elect if that were possible.

For there shall arise false Christs, and false prophets, and shall shew great signs and wonders; insomuch that, if it were possible, they shall deceive the very elect.

Like Loading...
‹ These Are Your Democrats America: Insanity, Stupidity, and Utter Chaos Reign in the Wake of the Release of the Mueller Report
No, Ilhan Omar,Christ Is Not Palestinian ›