Home › Censoring of truth › What Are The Dems Newly Elected Precious Up To This Week?

What Are The Dems Newly Elected Precious Up To This Week?

I think I can safely say Americans at least a huge number, are in shock and disgust over the newly elected women of Congress. They came on the scene as comic, vengeance filled enemies of America. That’s not a stretch as one of them is portrayed as a cartoon savior of the country, from Republicans. You can’t make this stuff up. It’s being created by “Devils Due” comics. All they care about, like most of the democrats is destroying our beliefs, our morals, our economy and our Republic. They want a fundamental transformation to socialism and dictatorship. Cortez even claiming she’s “the boss. ” From NBC news.

Her new green deal has been exposed as costing $600,000 from each family in America. No words. As she told Americans to eat less hamburgers her and her staff was seen at a restaurant recently as her staffer ate a larger than life hamburger. Imagine that. She didn’t condemn that but instead condemned the man who took the photo. Republicans have filed a complaint with the FEC against her for campaign finance violations. Imagine that more hypocrisy. One lies and the other swears to it. So when Tlaib retweeted this it was like a hypocritical Neon sign.

That’s not near as serious as Ilan Omar’s hate filled rhetoric. Still praising Palestine she refuses to show support for Israel. Her loyalties are well known, and it doesn’t include America. And AOC and Tlaib back her antisemitic rants.

Recently a Palestinian publication launched a deplorable attack on a US Envoy.

“Anyone who follows the prattle of Jason Greenblatt, President [Donald] Trump’s envoy in the matter of the deal of the century, sees that his condition is very similar to Down Syndrome,”

And these are the people that Omar, Tlaib and Cortez praise while demonizing Israel. And they can’t understand why our closest ally should gain praise. I think it’s worth mentioning that it is no coincidence that Netanyahu is addressing the same witch hunt and condemnation as Trump. Not a coincidence. Trump and Netanyahu has stood firmly against Islam and anti-Semitism. And hell doesn’t like it.

Then there’s this from Omar:(Fox News)”Minnesota Democrat Ilhan Omar said she does not recognize Venezuelan opposition leader Juan Guaido as the interim Venezuelan president, defying consensus among Western leaders and her own party”

It’s also no coincidence that Cortez says she’s making a list of democrats who attempt to work together with Republicans. Yes she did proving they do not have America and our people as their primary allegiance. Recently Cortez said this after some democrats sided with republicans in voting for increased background checks on gun purchases and that ICE should be notified of illegal immigrants attempts to purchase guns. 26 Democrats sides with Republicans and prompted a revenge list.

(Fox News)“She (Cortez)said she would help progressive activists unseat those moderates in their districts in the 2020 elections, the report said. Her spokesman Corbin Trent told the paper that she made the “list” comment during the meeting.“

Well this immediately started my archives in my mind reeling. Obama’s top adviser Valerie Jarrett said the same thing about those who opposed Obama. And they buried it in the net, but I remember it clear. I did finally find this from NewsMax, while this was not the only source at that time the other reports are buried.

(NewsMax)”Calls are growing for the dismissal of Valerie Jarrett, one of President Barack Obama’s most trusted and longest serving advisers, while a new report claims she has been keeping a secret enemies list of those who may have questioned the president.“

Of course Cortez immediately took to twitter to say in essence that she didn’t really mean it.

The party of death and destruction has aided a new beast rising and now can’t control it.

While Pelosi and others are calling for a resolution to curb Omars hate filled rants it’s almost too late. Anyone who criticizes her is called islamaphobic.

Now on Omar and the other women supporting her, not only do they advocate infanticide by their silence, especially Omar they are condoning female genital mutilation. This is prevalent in Omar’s country of origin Somalia and even creeps in America in Somali communities. According to a report from UNICEF :

“In Somali society, the practice of FGM is an honoured tradition. Those who oppose it do so against the tide of public opinion. “

This is deeply seated in Islamic (Somali)belief and she refuses to protect young girls human rights. And you think her religious views does not compromise America? Wake up.

Now I’ll end with this, Cortez doesn’t miss a beat condemning ICE and a border wall. With tweets accusing ICE of rape and forcing drugs to children. Quoting a CNN report about a lawsuit brought about by an illegal teen immigrant last year accusing of abuse at the hands of ICE. (More). 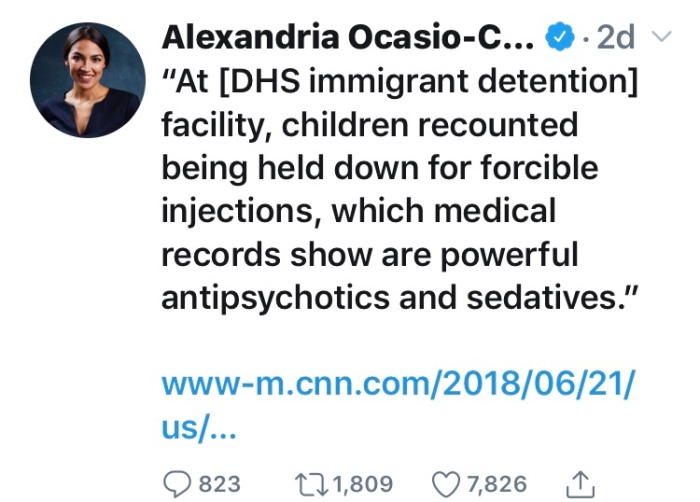 If you read the CNN article it actually proves Trumps declaration of a crises at our border. We need funding for the wall and facilities. Period. Look at these shocking numbers from a Texas publication.

(LMT online) U.S. authorities detained more than 70,000 migrants last month, according to preliminary figures, up from 58,000 in January. The majority were Central American parents with children who arrived, again, in unprecedented numbers.”

These new representatives are not only ignorant they are dangerous. It’s about to get very dangerous for conservatives, Christians, Republicans and even moderate democrats as we stand in the gap against tyranny and darkness.

We must speak boldly with conviction and truth as if our very existence is threatened because it is. The vision of a country in tatters is about to come reality. I believe we are the generation chosen specifically for this time. This time of deception and falling away. Put on the full armor (Ephesians 6:10-18) of God and plant your feet firmly in truth and take a stand.