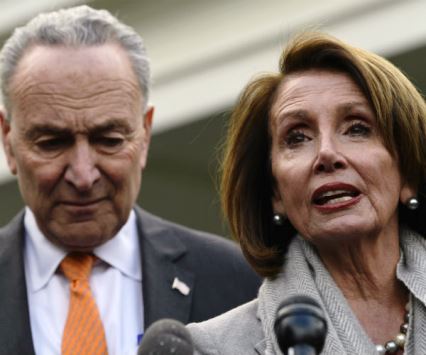 (True Conservative Pundit) Never before has a political party been so devoid of integrity as the Democrats of today are.  Nancy Pelosi and others have the nerve to accuse President Trump of “playing politics” while the poor government workers are suffering because they are not getting paid.  Pelosi and Schumer are flat out lying through their teeth.

It is the Democrats that are playing politics and refusing to budge an inch.  Trump has shown that he is willing to negotiate by granting the Dems things they asked for in his newest proposal to reopen the government.  Pelosi flat out stated no deal.  According to Fortune, Schumer said:

“Trump’s proposal was a “harshly partisan” plan that would give the president all he wants before reopening the government.”

Partisan????  What a joke!  Trump offered what the Democrats have asked for, namely an extension for DACA, an extension for TCP, and increased funding for humanitarian needs at the border!  How can Schumer lie like this and sleep at night?

Watch the video below to hear Chuck Schumer’s blatant lies about Trump and Trump’s deal to reopen the government.

Chuck-you Schumer flat out lies with a straight face and has no problem doing so.  Trump’s offer, his deal, whatever you want to call it was based on things Democrats told Trump that they wanted!  So how is it that Trump is dictating terms and telling the Dems what they want?  Trump did no such thing.  Also, this was an offer, as in not written in stone and subject to further negotiation.

Nancy no-mind Pelosi has said that the government needs to be reopened before there will be any negotiations whatsoever – then Pelosi says, but there will be absolutely no funding for a wall of any kind (the last part of that statement is not being widely reported).  What kind of negotiating is that?  You give us 100% of what we ask for (the Dems) and in return we will give you nothing you ask for.  That is negotiating?  Perhaps Chuck and Nancy need to go back to high school and relearn what negotiation means?

Further more, the self-righteous Nancy refuses to even meet with President Trump to discuss the matters at hand. How does one negotiate when the other side refuses to even discuss it?  This is not negotiation; this is acting like a child and throwing a temper tantrum.

It is amazing that anyone can listen to Pelosi and Schumer’s statements and honestly believe that these two heads of the Democratic Party have America’s bests interests at heart.  Pelosi and Schumer have one goal in mind here, the destruction of the man they hate with a passion exceeding anything else in their lives – Donald Trump.

While Trump has tried on multiple occasions to negotiate with the Democrats, Pelosi and Schumer have said no deal.  They have made it clear that there will be NO funding for a wall, while insisting that the government be reopened for any negotiations to take place – again, what negotiations?  In the latest Democrat brainstorm, the Dems are going to offer the 5 billion Trump wants with stipulations – namely that this money can be used to make improvements to the physical assets that we already have at the border as well as beefing up security, BUT, no money, not a penny is to be spent on any new wall construction.

This is pure sophistry on the part of the Democrats and intellectually dishonest as the day is long.  The Democrats are going to make this offer because then they can turn around and say, (when Trump refuses the offer and rightly so) see, we are bargaining in good faith and Trump just refused our offer, again.  The mainstream media will back all this dishonest sophistry and make the Democrats out to be the good party while Trump is a political hack standing in the way of reopening the government.  And since most all of the media supports the Politicrats, the people who listen to this garbage will suck it right up and believe it as being fact.

While the Democrats and their RINO helpers play political games meant to deny Trump succeeding at delivering on his promise to the American people to secure the Southern border:

To top it all off, Nancy Pelosi, that paragon of virtue has disinvited President Trump from making the customary presidential State of the Union address before both houses of Congress in the U.S. House of Representatives.  Nancy’s reason for this is a complete fabrication – Pelosi stated a fear of adequate security for the address.  The real problem is that Pelosi and Schumer do not want the president making his case to the American people concerning the wall.

This writer has never before seen such flagrant disrespect for a sitting president – ever.  Disagreements are fine, but the Politicrat’s outright and constant lying, manipulation of the public through their dedicated toadies, the national media, the witch hunt to destroy Trump completely (the Mueller investigation, the illegal FISA warrants, the made up Steele dossier) the extreme corruption in the Department of Justice and the FBI – are not fine and in fact are illegal.  These things are again, all aimed at taking down Trump.

The Democrats are the opposite of Trump, and are not at all concerned with improving the lot of the common man as they would have all of us believe, nor are they defending the rights of We the People.  The Democrats and the RINOs operate on the philosophy that they are central to defending the rights and freedoms of all Americans, and that they are fighting for the good of America – this writer is here to tell you that this is the single biggest LIE ever sold to the American people since the inception of this great Republic!  The Politicrats are out to line their pockets with ill-gotten wealth, bask in their ill-gotten power, and enjoy said power and wealth at the expense of the idiots who elect them, along with the rest of us.

Donald Trump will not lie down and take it, and he will not roll over and sit like a good boy, like past presidents have done.  Trump is, regardless of what many think of him – fighting for the good of the American public.  Therefore, trump IS enemy number one.

The REAL enemies of America are the lying, corrupt criminals of the Democratic Party and their RINO helpers (the Politicrats) not to mention the shameful media that lies and supports these traitorous criminals.  Along with all of these, we have the hateful leftists in control of most of social media like Facebook, Twitter, and YouTube etc.  It is amazing that conservatives are heard at all!  That being said, we will NEVER give up nor will we give in!

Since 2013, True Conservative Pundit has featured the insightful writing and reporting of Greg Holt.  His writing has been featured on American Prophet, Conservative Firing Line, DC Clothesline, Godfather Politics, Capitol Hill Outsider, Sons of Liberty Media, Rev. Austin Miles, and others.  Greg is also the Publisher and Editor of Inspirational Christian Blogs