The darkness has become brighter than the light.  An oxymoron right? “Words that really are opposite to each other, would be words that just cannot be put together.”

But recently this opposite is true.  The darkness in America, the world and yes even the Christian community is brighter than the light of truth.  Noone questions anything anymore, accepting anything that is put on-line, on the TV or the airwaves as truth without so much as a question or demands of proof that its not twisted.  Have we become so dumbed down that we refuse to research for facts?  Have we as Christians become so deaf, dumb and blind that we cant even find the truth in the great deception?  Have we become like the Pharisees, or like clanging symbols?  (Please read to the end)

The first head shaking moment is the staunch attack on Tucker Carlson from Fox News.  I’m not blindly defending him, however the sensationalist’s are out again crying foul for statements he supposedly made to a German magazine.  Well the things they quote him saying are things like “Trump is incapable” or Trump doesn’t understand the system.”  Sounds like a liberal leftist view, but a little like Tuckers style when he uses the lefts own words against them.  And he has never denied that he is liberal conservative, another oxymoron, but makes sense when you listen to Tucker.  And yes I still believe true liberalism has no place in Christianity.  So I set out to find the interview.  Guess what?  You can’t find it.  All you find is a storm of fury attacking Tucker, thats right no proof, no full text of the interview, no video of the interview only quotes he supposedly made.  You would think that by now people would know that this is the exact tactics of  dark liberalism.  I’m shaking my head and waiting for concrete proof not sensationalism. And even if portions are true, ask why.   Even those on the right are fomenting attacks on Tucker Carlson.  Again I’m not defending him just calling for explanations rooted in truth, and asking why.  And so there is no doubt, I don’t always agree with President Trump either.  Our Government was set up with checks and balances so that the 3 branches of government could prevent a dictatorship or a takeover.  But what happens when a Judicial branch meant to check rogue lawmakers actually does their bidding?  We find what we are seeing today, a government in chaos.

Now the second head shaker.  A statement made by fools.  Yes fools, or sheep in wolf’s clothing.   A professor from the liberal, diverse state of Minnesota tweeted that God didn’t get consent from the Virgin Mary to impregnate her.  Yes, yes its true.  Outrageous as it is, it’s true and sad. 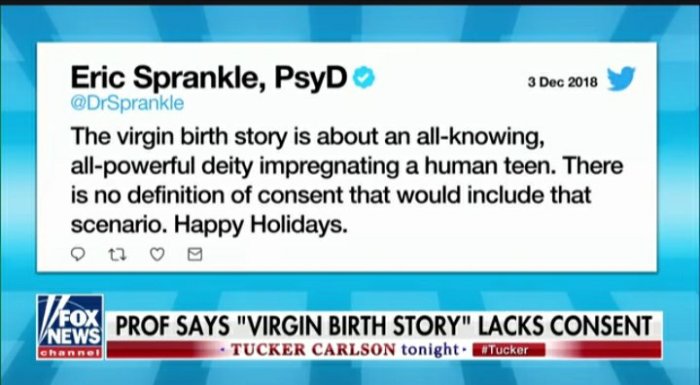 Now this professor is either foolish or uneducated.  Had he bothered to actually read the scripture telling of the Annunciation he would have known this was a blatant lie he told.

Mary had such faith in God she said this:

Luke 1:38 “I am the Lord’s servant,” Mary answered. “May your word to me be fulfilled.” Then the angel left her.  So again I was left both disturbed and shaking my head.

Now I’ve never shied away from hot button topics, so no matter how you worship the birth of Christ or what you think about Christmas the next headshaker will also leave you shaking your head.  I have written many times about Christmas and pagan activities tied to Christian beliefs.  Everyone here knows that I choose to use this time as a celebration of Gods gift to the earth and Christs birth.  Even though December 25th is a man made day, its a date that we can all take notice of.  Anyway an elementary school principle was put on suspension recently in Nebraska for her part to change the celebration of Christ into a more acceptable pagan day.  You see she banned candy canes because their shape is, she says, the letter J and stands for Jesus, also banning red and green colors.  Instead telling teachers that reindeer, and frozen characters were the only acceptable images.  Her attempts to further paganise this holiday brought outrage from parents and she was suspended.  Shaking my head.

Julia does an excellent writing on the paganism of Christmas celebrations across the world.

A Massachusetts church, yes a Christian church put Baby Jesus in a cage this year to protest immigration procedures. Lord have mercy. See why liberalism has no place in Christianity.

Watching Christmas movies has left me shaking my head also. When people look to a figure like Santa Clause to bring magic, blessings and gifts and even save the world with love its, well pagan. One movie shows a couple every year standing in front of the christmas tree they planted as children,  asking santa to give the tree magic and grant their wish. Others portray people as looking up into the night sky thanking santa for blessings of love or wishes granted. There is no magic there.

What if, instead of looking to a pagan diety for miracles and blessings we actually look to God, what if instead of watching for santa in the sky we watch the sky for the teturn of our King? What if NORAD launches a watch for Christs return? What blessings we would recieve.
I was on the search for a flannel shirt that led me to a popular sporting goods store, and before I even got into the store I knew what was going on. Hoardes of beautifully dressed children being drug along by anxious parents rushed to introduce these children to santa. What if they rushed them to meet Christ instead.

I only have one thing to say and its scriptural:

Joshua 24:15 And if it seem evil unto you to serve the Lord, choose you this day whom ye will serve; whether the gods which your fathers served that were on the other side of the flood, or the gods of the Amorites, in whose land ye dwell: but as for me and my house, we will serve the Lord.

Like Loading...
‹ Rush Limbaugh: Angry and Destructive French Rioters Shout ‘we want Trump’
Where Is America In Prophecy? ›