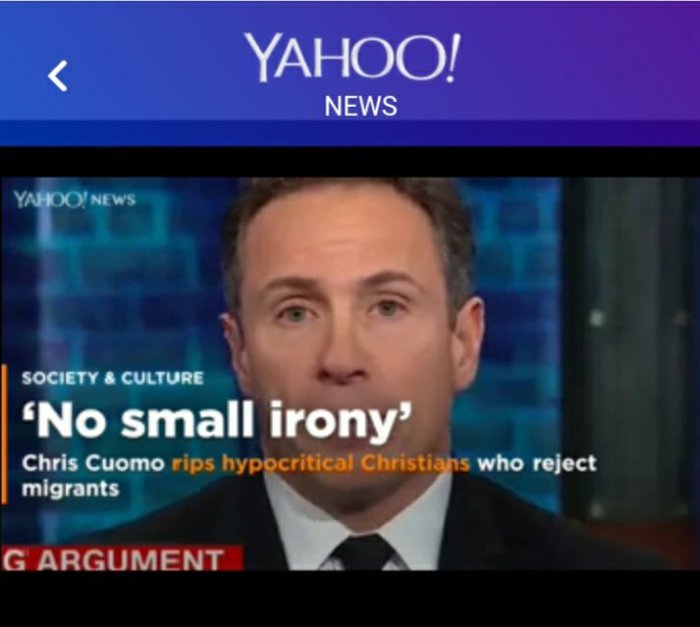 I want to state from the start, Christ was not an immigrant, He didn’t run.  There, I’ve said it. Liberal heads are exploding everywhere. Major evangelists agree. But sadly even some liberal Christians agree with those who wish to diminish the Gospel of Christ. Liberalism has no place in Christianity.

CNN’S Chris Cuomo has stepped right into the liberal’s view of Christ and His triumphant entry into the world, shaming and mocking Christians again. A post from Yahoo News titled Chris Cuomo shredds hypocrite Christians who celebrate Christmas but reject immigrants, emerged today and it blows your mind.
Well Mr. Cuomo theres not a mention from you about the thousands of Christians begging for Assylum from countries that slaughter them in the streets. Asia Bibi is in danger and begging for help, but you are silent about that. And I suggest you read the story of our Saviors birth again, he wasnt brought into this world as you suggest. And until or unless you stand up for persecuted Christians seeking assylum you are but clanging symbols. Your liberal petty coat is showing. CNN’S liberal Chris Cuomo said this recently:

“No small irony that Christians are getting ready to celebrate the story of Christmas, which is the exact story that we are trying to block out here,” he said. “The poor and unwanted who wound up bringing the savior into this world in a stable, rejected. Just as we’re doing now. This is who we are now and it must be exposed.”

The liberals do this every year. Christ was an immigrant, blah,blah,blah.

The city of His birth was chosen and given in prophecy thousands of years before his birth,  given through the prophet Micah. An Angel visited His mother with the news of His miraculous birth. Angels announced His birth, God guided Kings with a star to attend His miracuolous birth. Shepards attended, yes,but the birth of a King was guided and attended by heavenly hosts. Not a migrant caravan. He humbly accepted His birthright and gave His life freely. He had haters from the beginning who wished Gods Son dead before He fulfilled His purpose. He did not belong to a caravan running from His country of origin. His purpose  was to offer Himself as sacrifice for a lost world. One of the tenets of His gospel is that the meek shall inherit the earth. So save it. We are not totally oblivious to the heartwrenching events at our border. Yes God is watching, and He knows the truth, He is helping those who truly seek Him, and He is recording those involved in human trafficking, those who exploit suffering for personal gain. Those who create crises for personal gain. I pray daily for this. Maybe the liberals should seek God and also help those persecuted for their faith.
“Earth behold your King!” He came as a lamb led to slaughter, but returns as a fierce and mighty Lion. King of Kings! He did not flee, and noone took His life, He gave it freely. His kingdom at that time was not the world, His riches were not worldly. It’s time we find our tongues and speak out about the truth and the Spirit of Antichrist which is changing all laws, and times. Changing and twisting gospel to infect your mind and soul with deception and confusion.
Come quickly Lord Jesus.

Like Loading...
‹ The book of life……A record of our works
Christian Pastor Arrested In Minnesota for Telling About His Conversion From Islam ›

Categories: anti-christ, attacks on Christianity, Censoring of truth, Christianity in the news, Commentary by CJ, gospel of Christ, news, The Birth Of Christ