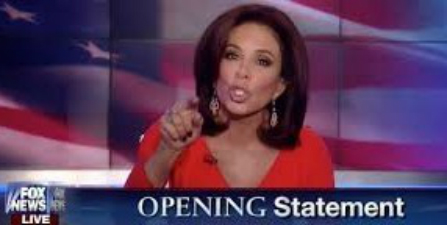 (The Olive) It never ceases to amaze me the depths that the depraved leftists will go to in order to get their way. Judge Jeanine Pirro, host of Fox News Justice with Judge Jeanine was invited onto The View. Things predictably went downhill in a hurry, especially after Whoopi Goldberg opened her big mouth.

Watch the video below of the contentious interview:

Judge Jeanine Pirro on The View

Here is what the clip does NOT show you – Whoopi followed Judge Jeanine off the set and got right in her face, as in inches away, in her face, and proceeded to say, “f**k you” several times. Then dear Whoopi told Judge Jeanine to “get the f**k” out. (source, as of publication of this article, the interview with Judge Jeanine was not yet on Sean Hannity’s site)

At one time I liked Whoopi, no longer. It’s not a problem for me that Whoopi stands firmly against everything that we conservatives believe in, Whoopi as an American has that right and I would defend it. What does bother me is the infantile, demeaning, and verbally violent behavior exhibited by Whoopi Goldberg as well as many others when their pet viewpoints are opposed. There are also the many celebs that are inciting violence against Trump as well as his supporters.

Madonna thought about blowing up the White House

Maybe you are wondering why I would even devote an article to this issue. Here is my answer:

The bottom of the barrel, juvenile, and caustic behavior of Whoopi Goldberg is becoming all too common. Even more disturbing, the threat of violence, and the actual use of violence are becoming the hallmarks of how the Democrats deal with issues they are opposed to. Recently, Maxine Waters urged supporters to use violence against Trump supporters.

Here is another point to consider: remember when Rosanne Barr was fired for a tweet by ABC? Yet ABC does absolutely nothing about the foul-mouthed abhorrent Whoopi Goldberg who has no tolerance for any view that opposes hers, just like the rest of the so-called tolerant Leftists. ABC is also the network that cancelled a very successful show (Last Man Standing) because the show’s driving force, Tim Allen is a conservative.

If these kinds of behaviors by celebrities, networks, and Left-wing party leaders are tolerated and encouraged, this writer guarantees that we have not seen anything yet. The level of violent rhetoric and the use of actual physical violence will increase exponentially.

One celeb wants to punch Trump in the face, another does a music video of killing Trump, yet another in a Shakespearean play murders Trump.

Once upon a time people with opposing viewpoints actually sat down and had a civilized discussion about their differences. Once upon a time the different sides of whatever issue had honor and personal integrity. There were heated discussions over differing points of view, but most topics were openly discussed between parties without the very public rancor of today.

There is in today’s world no honor or truth among Democrats, (or among thieves) and their allies such as the Dark State. It is all about winning, at any cost. Lives are destroyed, (judge Robert Bork) people are killed, (Seth Rich) reputations are ruined, (General Michael Flynn) and nothing is off the table anymore. The Left attempted to hand the election in 2016 to Hillary Clinton, while Hillary utterly destroyed Bernie Sanders chances of cultivating the Democratic nomination through treachery and deceit. Then the Left attempted to have Trump removed from the presidency. The Left is still attempting to remove Trump or at the very least turn the entire country against him while seeking to invalidate anything he does even if what Trump does is good for the country.

This kind of behavior is attributed to children, but because these are liberal progressive talking heads, they are given a pass. The other problem is that the mainstream media in this country does not any longer support real journalism, or even seem to understand the foundational principles behind journalism – no instead the media of today is nothing more than glorified mouthpieces for the Leftists.

Going back to the Leftist meltdown over Trump’s Helsinki comments – let us not forget Barack Obama’s actual bowing to foreign dignitaries, which was perfectly acceptable, but Trump’s comments at the Helsinki press conference were not, which by the way did not in any way say what the Dems implied that they said. The full commentary does in no way imply what the media is saying it does.

News is the reporting of what actually happens in a given event, not your opinion, your spin, or your editor’s opinion, not to mention liberal groupthink. The standards of journalism are a foregone conclusion today, instead – the new normal is that the so-called reporting of today follows the liberal groupthink talking points. If the news does not match the groupthink of the liberal left, then the reporters simply invent stories or commentary out of whole cloth to match the liberal groupthink political position. The news of today is the literal counterpoint to O’Reilly’s the no-spin zone – “news” is comprised of almost total and complete spin, fake news CNN is a great example of this.

Rise up America and defend the Constitution and the lifeblood of America against those who would destroy America the great!