I have been aware of Adnon Aktar for several years.  A few years ago he rose in the sights of Christians who followed prophecy.  His kooky teachings raised eyebrows across prophecy circles.  One prominent Christian Author, Joel Richardson, who wrote books like “The Mideast Beast”, interviewed him.  (Watch here.)  If you havent read Joel Richardson’s writings, now is the time.  Back to Adnon, he always surrounded himself with blonde women scantily dressed, Some say he called them his kittens.  Bizzarre! To say the least.  He ascribed to some of the same teachings as the Shia Twelvers of Iran with a few strange twists.  Strange because it was like Islam, peppered with truth from the Gospel but riddled with lies.  One lie was that Christ was not crucified, He was protected by God.  He said the Roman soldiers who searched for Christ to crucify him didnt find him.

He taught that Jesus ascended into heaven as a light beam.  And he will return to the Temple Mount with the Mahdi to pray.  Only when Jews and Christians have embraced Islam.  He says the Antichrist is atheism and communism.  He taught that darwinism, and communism with materialism is the antichrist.  And you what he may have a valid point there, as they play a huge role in the end times.

He taught much deception, including the Ark of the Covenant returns to a rebuilt Temple, built by Islam with the Jews, and then sacrifices would be reinstated.  This is where Jesus reappears.  Hogwash.  We know where Jesus appears, and we know how He returns and it is not in secret with only a prophet of Islam recognizing Him. 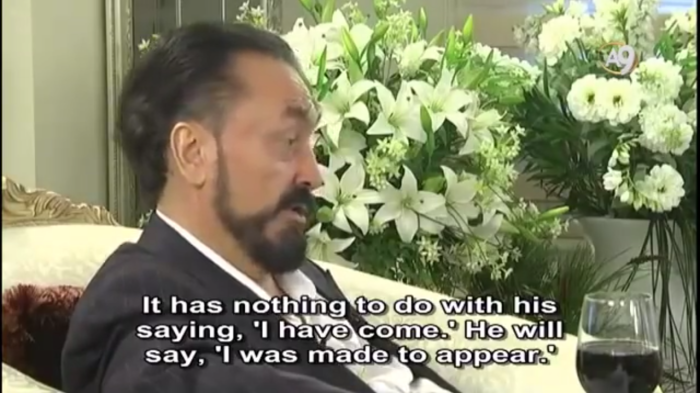 He refers to Christ one minute as Prophet and the next as a messiah, but the Christ he refers to is not our Messiah and I will never recognize that.  But sadly many Christians are swallowing this lie.

Why was Adnon arressted?  Could it be because he acknowledged God indeed gave Jerusalem to the Jews?  I dont know.  BBC reported this yesterday:

“Adnan Oktar was detained on Wednesday morning on suspicion of fraud, alongside more than 100 of his followers in a series of raids.

Critics have accused the Islamic preacher of running a cult.

He operates his own television channel, through which he delivered his religious sermons.

Turkey’s financial crimes police were behind the morning raids on Mr Oktar and his followers. They were arrested on suspicion of a litany of charges, including running a criminal organisation, tax offences, sexual abuse, and counter-terrorism laws.

Turkish media said 166 of his followers were arrested, but a total of 235 are being sought.”

So it still bears watching.  If for no other reason because of Turkey going after and squashing freedom of speech and freedom of expression.  And remember Turkey is crossing into a dark path with Israel and wishes not only to destroy them but wants the Ottoman empire resurrected with them as the Caliphate.

In 2013 we reported on an article by the Jerusalem Post when Adnan’s representative met with Israeli officials and Rabbis to soothe ruffled feathers, that said this:

“Commenting on Erdogan’s comments critical of Zionism, Babuna told the Post that “Adnan Oktar said if Zionism is the right of Israelis to live in the holy land where their forefathers lived and worshiped then it is perfectly compatible with the Koran.”
“Allah gives the [Jews the] right [to Israel] and nobody can take this away,” he said. Endorsing “an alliance of Israel and Turkey” and calling the Jewish state Turkey’s “natural ally.”

WND reported this around the same time frame:

” In a historically unprecedented development, a famous Turkish Muslim leader and a prominent group of Israeli rabbis have joined together on one of their declared goals, to rebuild the Jewish Temple in Jerusalem. Adnan Oktar, who uses the pen name of Harun Yahya, is a controversial but highly influential Muslim intellectual and author with over 65 million of his books in circulation worldwide. Oktar recently met with three representatives from the re-established Jewish Sanhedrin, a group of 71 Orthodox rabbis and scholars from Israel, to discuss how religious Muslims, Jews and Christians can work together.”

Like Loading...
‹ God doesn’t hold grudges,and neither should we
The Only Bread of Life and Water of Life ›