Today we honor a great man of God.  Billy Graham.  He passed this morning into Glory.  Today he is laying his crowns at the feet of our Lord!

Rev.  Graham was such a part of not only America, and the world but of our generation and the one before.  He brought millions to Christ.  And yet he was humble.

He said this about his death:

“Someday you will read or hear that Billy Graham is dead. Don’t you believe a word of it. I shall be more alive than I am now. I will just have changed my address. I will have gone into the presence of God.” – Rev. Billy Graham
He also said this world was not his home he was only passing through. 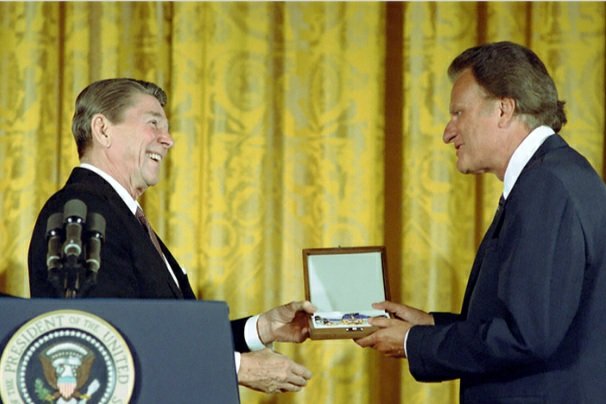 He received the Presidential Medal of Freedom in 1983

He was sought by Presidents and Kings for his council.  You know why?  Because He spoke to God and listened to Him.

He was known as America’s Pastor.

He and his wife Ruth presented with a congressional medal

I could go on and on.  This man was a lighthouse for so many troubled lost souls.  He will continue to shine bright through his children and his ministry.  His family is in our prayers.