Home › anti-christ › Do Western Leaders Know The Terrorists They Are Fighting?

Do Western Leaders Know The Terrorists They Are Fighting?

I have been trying to follow the latest scramble for power in the Middle East.  I find it intriguing and significant.  I have mixed reactions.  It does seem that the West is pushing for a new power or renewed power involving Saudi Arabia.  Remember the UN recently named them as a part of the Human Rights Council.  An article from AlJazeera while biased rings with truth in part.  This quote from that article says it all.

“The essence of the problem, it seems, is that no one can quite agree on who the terrorists are that they are meant to be fighting.”

All articles about this point out that Qatar is backing terrorists like the Muslim Brotherhood and Iran and Alqueda.  But Western leaders can’t seem to agree on who is who and what is what.  President Trump has not declared the Muslim Brotherhood as terrorists but some members of  his staff say they are.  Same as other leaders.  Obama gave them positions of voice in the US, at least he let them advise him.  And helped to bring them into power in Egypt.  This war in the Middle east and scramble for a leadership role in the Caliphate is divided by religious beliefs.  Deny it all you want but it’s true.

The Global coalition of Arabia solidified by Trump’s visit and the grasping of a glowing global orb seemed to ostensibly give power. Then they, including Trump and Rex Tilkerson, performed the tribal sword dance called:Originally, the “ardah” and in history,  was performed only by males of tribes of the central Nejd region before going to war,  but nowadays it is done at celebrations, weddings, and national and cultural events by males of all tribes, such as the Jenadriyah festival. There currently exists various types of ardah across the Arabian Peninsula. 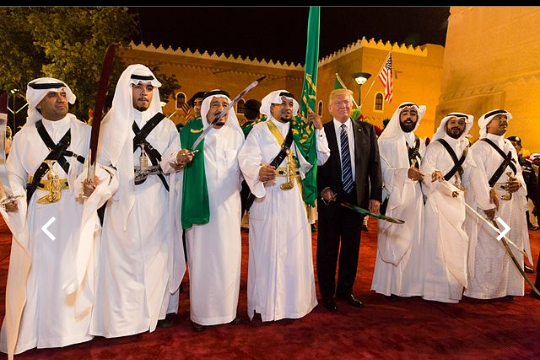 I can only remember seeing one other Western official performing this with them and that was Prince Charles.  So to quote our ex Vice President,Joe Biden, “This is a really big deal.”  But History tells us that a Tunisian Sabre was given to Madison and his wife treasured it.  It’s also said that Middle Eastern Sabers are symbolism of power.

This is significant in many ways, with the attack on Iran today this bears careful watch and prayer.  Prophecy is unfolding!