Home › Abortion › WHY Does JUDGEMENT Begin at the House of GOD ?

WHY Does JUDGEMENT Begin at the House of GOD ? 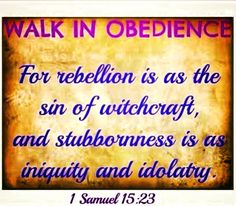 Remember what happened to  the Prophet Samuel’s garment  when the king tried to prevent the Prophet from leaving him, after Saul  DISOBEYED the Word of the LORD ?

And Samuel said unto Saul, I will not return with thee:

rejected the Word of the LORD,

and the LORD hath rejected thee

from being king over Israel.

And as Samuel turned about to go away,

he laid hold upon the skirt of his mantle,

And Samuel said unto him,

The LORD hath rent the kingdom of Israel

from thee this day,

and hath given it to a neighbor of thine, that is better than thou.

the STRENGTH OF ISRAEL

will not lie nor repent:

for HE is not a man,

that HE should repent.

The lady  “pastors” of Iowa … who have publicly and politically supported  ABORTION …  have a BIG SURPRISE coming their way.

Scripture tells us that  JUDGEMENT BEGINS at the HOUSE of GOD. Those ladies, like Judas,  have all read Scriptures ( at least, in seminary ) , but they have NOT BELIEVED THEM.

Unfortunately , that one is just one of MANY Scriptures they should be taking serious heed unto, but they are not…  FLAGRANTLY …  are not laying to heart.

It is EASY for any casual observer to see a host of other Scriptures these fine ladies FLAGRANTLY  ignore … nay, even preach against from “their ” respective pulpits.

For a start, let’s look at this Scripture:

But I suffer not a woman to teach,

nor to usurp authority over the man,

but to be in silence.

The Apostle Paul’s words in context are dealing with a “woman professing godliness”. It seems to be in reference to general conduct although the Apostle makes reference to men praying and how we ought to pray for rulers, etc… thus conduct in the church is also applicable here.

Well… the lady pastors have been putting forth their PHILOSOPHIES, it seems, ( instead of GOD’S WORD) about abortion so perhaps that would be called “teaching”, since they wear the mantle of their pulpit.

Their strident voices do carry to all, so the authority issue “over men” is a problem here too.

Plus, their collective  voices are ANYTHING but “silent.”  Indeed, they insist on SPEAKING OUT !

So, that is another Scripture we can count as being DISOBEYED.

Are there any More  that these lady pastors have thrown out as  “not applicable”  to them ?

Here is one from 1 Peter 3: 3-7  about wives who happen to be CHRISTIAN women as well, albeit not “pastors.”  Let’s listen to what this Apostle taught:

Whose adorning let it not be that outward adorning of plaiting the hair, and of wearing of gold, or of putting on of apparel; But let it be the hidden man of the heart, in that which is not corruptible,

of a meek and quiet spirit,

which is in the sight of GOD

For after this manner in the old time

who trusted in GOD, adorned themselves, being in subjection unto their own husbands: Even as Sara obeyed Abraham, calling him lord: whose daughters ye are, as long as ye do well, and are not afraid with any amazement. Likewise, ye husbands, dwell with them according to knowledge,

giving honor unto the wife,

as unto the weaker vessel,

and as being heirs together of the grace of life; that your prayers be not hindered.

Well now, the lady pastors in their great vehemence to promote women’s “health care” rights, certainly left off that “meek and gentle” spirit that the HOLY WOMEN of old were known for.

But then, perhaps they do not have that “Scriptural vision” of themselves as the “weaker vessels” that Scripture distinguishes womenfolk as having ?

Hmm-m-m.  Scripture has something to say about how we see ourselves, yes ?

But be ye doers of the Word,

and not hearers only,

deceiving your own selves.

For if any be a hearer of the word, and not a doer,he is like unto a man beholding his natural face in a glass: For he beholdeth himself, and goeth his way, and straightway forgetteth what manner of man he was. James 1:22-24

Certainly this lonely Scripture has no bearing upon the lives of those politically-vocal lady pastors in Iowa… or does it ?

[ I think the count is now up to  3 Scriptures tossed away , and we have not yet addressed the more SERIOUS issues involved  in their vocal and public support of abortion. ]

Here are listed just a few more OBVIOUS Scriptures, obviously “not in vogue” with them.

1 Corinthians 11:5-6 But every woman that prayeth or prophesieth with her head uncovered dishonoureth her head: for that is even all one as if she were shaven.For if the woman be not covered, let her also be shorn: but if it be a shame for a woman to be shorn or shaven, let her be covered.

1 Corinthians 14:34  Let your women keep silence in the churches: for it is not permitted unto them to speak; but they are commanded to be under obedience as also saith the Law.

1 Corinthians 14:35 And if they will learn any thing, let them ask their husbands at home: for it is a shame for women to speak in the church.

2 Timothy 2:4  No man that warreth entangleth himself with the affairs of this life; that he may please him who hath chosen him to be a soldier.

[ Involvement in the political, social, and military arenas are the affairs of this life, are they not ?  Christians are strictly enjoined by Holy Writ and example NOT to entangle themselves in these arenas. ]

Now we are coming to some issues that MUST be dealt with by the Body of CHRIST.

Which Scriptures in the New Testament do we KEEP and which Scriptures under the New Covenant do we IGNORE  as “invalid” … regardless of who spoke or wrote them ?

THOU SHALT NOT KILL …. This is one of the 10 commandments and The LORD JESUS reiterated this law in the Sermon on the Mount, Matthew 5:19, in the Garden, Matthew 26:52,  and by the Apostle Paul in  Romans 13:9.

As in the days of Saul, The LORD EXPECTS HIS PEOPLE TO OBEY HIS WORDS.

If we cast His+ Words behind our backs and EXCUSE OURSELVES from keeping them, we have a JUDGE:

the very  WORDS  THEMSELVES

He that rejects ME+,

and receives not MY+ Words,

has ONE that judges him:

the same shall judge him

in the last day.

The BLATANT, FLAGRANT, IGNORING of GOD’S HOLY WORD in matters of Life and Death, in how we conduct ourselves in the churches, in “selecting” Scriptures to keep and Scriptures to toss away … are the reasons why

JUDGMENT  MUST  BEGIN WITH US…

those who have been GIVEN THE LIGHT

and have thrown it away.

Christian women are not allowed to be pastors in HIS+ church. They can be pastors in their OWN  “church,” but that church will be an anathema to GOD because it goes against the Holy, written, revealed Word of GOD.

Who among us has more wisdom and Spiritual authority than the Apostles of CHRIST JESUS ? They said church authority  does NOT reside with the women. Women are not ALLOWED to speak in the church, according to the Apostles. There will be no excuse.

“LORD, LORD, haven’t we done…?”  will be the hue and cry  before the Judgement Seat of CHRIST. We all know His+ RESPONSE to that.

Women who kill their unborn babies are murderers in GOD’S SIGHT … and HE+ does hear the screams of the Little Ones.

Christian PASTORS who approve of WHAT GOD DOES NOT APPROVE OF  will face His+ Wrath unless they repent.

It is NO secret that killing is still killing regardless of the name it carries and the Supreme Court’s terminology for a baby in the womb.

you are not PREGNANT !

Yes, women have RIGHTS.  They have the RIGHT to remain pure and retain their virginity until marriage.

If they choose to SIN, then they will have the LAW of Sowing and Reaping to deal with. Then they lose ALL RIGHTS.  They may easily become diseased.

If they conceive a child in their promiscuity, then they have the LAW of Sowing and Reaping to deal with again. They can repent, grieve over their immorality, and ask The LORD to help them … and HE+ will turn it into a blessing for the repentant ones.

Or, GOD FORBID, they will choose to harden their hearts and deepen their debt of sin and kill the “evidence” of their promiscuity.

Yet, the LAW of Sowing and Reaping digs in deeper and simply WILL NOT disappear. Terrible side-effects will eat away at the flagrant, unrepentant sinners who CONTINUE to harden their hearts.

[  And do not be deceived, you male partners in these sins. GOD sees all. HE+ WILL SEE TO IT that the LAW of Sowing and Reaping will land upon you EVEN GREATER than upon the woman you impregnated. ]

And what, O CHRISTIAN PASTORS , do you suppose The LORD will think of your comforting,  ” approving counsel” to the women who seek an abortion but are troubled about the morality of it in their hearts ?

You ease away the conviction of sin troubling their souls and show them the path towards “Planned Parenthood” to have their unborn baby chopped apart to SELL their organs to the highest bidder !

as the sin of witchcraft,

as iniquity and idolatry.

Today is the time for repentance.