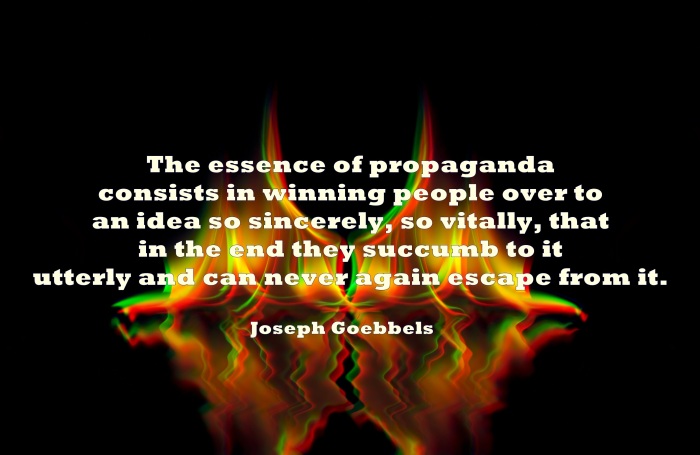 It took 8 years for Americans to wake up from a propaganda winter. Propaganda was sown much like the field of poppy’s in the wizard of Oz that put Dorothy in a sound sleep. Americans swallowed it hook line and sinker. Not questioning only believing change was coming to America.

A headline in the Drudge report this morning caught my eye.

Study: Half of people “remember” events that never happened

Wow.  This article reeled in my mind.

The study of over 400 volunteers said over half of the people will believe in a fictional event if told about often enough and imagined it happening.  they said they planted harmless memories in people’s minds like a balloon ride and they believed it as truth.

Hitler did this in WWll.  Satan first introduced this to mankind in the Garden of Eden.  When he whispered in Eve’s ear:  “Thou will not surely die.” (Genesis 3:4)

And it has exploded from there.  Hitler was proficient with his propaganda machine.  Many have followed since him.  Obama, and all his apple polisher’s went to work.  He elicited the help of the Arts community and entertainment field to spread his views far and wide and it worked.  One prime example is the Benghazi lie.  They pushed a version of fiction hoping that Americans and the world would buy it.  Which they did, until some in the media started speaking out.  Many fictions were spread throughout the world to wage war for greed and plunder completely ignoring human rights.  The migrant crises was created by using the same tactics.  Christians were caught in a genocide, innocent people as the Yazidi’s and Nigerians were caught in this darkness that spread like a cancer.

Trade deals were formed for wealth to be re-distributed completely ignoring the heinous, barbaric Human rights abuses.  Abuses that were meant to be squelched as far back as 1948.

In 1948 the UN adopted the Universal Declaration of Human Rights. Why are they allowing barbarous acts against Humans 68 years later??? Better yet why is the west , the leaders for freedom turning a blind eye to these heinous acts committed by not only Daesh but whole Islamic countries like Pakistan, Iran, Thailand, Malaysia and a host of others??   Why is the UN ignoring rights of Freedom for Christians? Why has Europe and even the US pushed Christian refugees deeper into oppression and persecution?? Stop this insanity, demand the UN UPHOLD THE RIGHTS OF CHRISTIANS!AND PROTECT THEM FROM TYRANNY.
In their own words the reason for the declaration on Human Rights: Whereas disregard and contempt for human rights have resulted in barbarous acts which have outraged the conscience of mankind, and the advent of a world in which human beings shall enjoy freedom of speech and belief and freedom from fear and want has been proclaimed as the highest aspiration of the common people.
The Human rights abuses that brought this declaration in the first place in 1948 is repeating itself in barbaric new ways!!

This darkness has drawn the world back into the dark ages, without so much as a wink or a nod from Human Rights Groups or the Western Christians.  Not until recently when Americans realized they had been duped and spoke out, did even a glimmer of hope appear on the horizon.

Thailand became a choice destination for Christians in Pakistan to escape death and persecution.  It was close, it was cheap to travel there and promise of a better life drew those escaping death.  Now years later they are ignored and even discriminated against.  Muslims are given preference over the Christians applications for assylum, all sanctioned by the UNHCR.  Cries go unheard, and pleas for help are met with statements like “Pakistan doesn’t persecute Christians.”  Really?  Tell that to the thousands there that are raped, tortured, burned alive, and hung, drug through streets naked, and imprisoned as Asia Bibi for Blaspheme only for being a Christian and drinking water from a muslim well.

Yesterday the Thai government raided a Christian area of Bangkok arresting 45, 19 of which are children.  All had the new UNHCR cards that were mandatory for all asylum seekers, all were still arrested.  Now they are forced to pay money as bail or they will go to permanent detention centers that are crowded, filthy and lack food and medical care.  And obama still say’s the TPP is a good deal, all the while Thailand is commiting ethnic cleansing and persecution against Christians.  Not a word from Obama, or Western leaders about these Human Rights Abuses.  Thailand has been embroiled in Abuses for years, even killing it’s own people.

Then there is Iran, where do you even begin there?  Mass slaughter of it’s citizens in the take over of the evil regime, to slaughter of political prisoners, and torture and arrests of religious minorities.  Persecution of women by beating them and imprisoning them for refusing to wear the Hijab or simply for attending a party in mixed company.  Now there are reports surfacing about a new amusement park for children that allows boys to fire plastic bullets at an imagined enemy, mostly Israel and the US.  And this is sanctioned by silence from Western Leaders.

When is enough, enough??  Syria has all but collapsed under the mire of proxy wars that Obama is backing. Only the King of Jordan recently acknowledged this was a Holy War.   Hundreds of thousands have died, and hundreds of thousands displaced and starving because again of personal agenda’s.

Propaganda abounds and will not stop until people wake up, and say enough.  Why do you think American liberals and those manufacturing propaganda are in a war to tell the public that all other news besides theirs is FAKE?  Their lies are being exposed just as the Bible warned.  Nothing will be hidden that is done in secret, all shall come into the light. (Luke 8:17) Wake up, say no more lies.  Help these Christians and innocent people, speak out tweet about their stories, share their stories and pray.