Be a Voice! Christian Prisoner in Iran Begins Hunger Strike over Denial of Medical Treatment 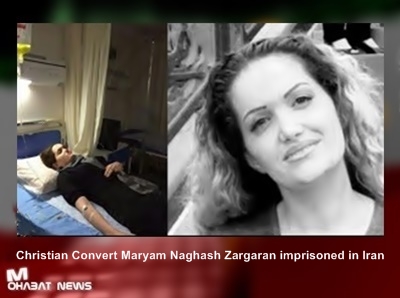 Christian convert with a heart condition protests treatment and imprisonment for role in house-church movement in Iran.

Mohabat News – Reports received from Iran indicate Christian prisoner, Maryam (Nasim) Naghash Zargaran has gone on a hunger strike to protest the unfair refusal of authorities to provide her with critical medical attention.

In addition to medical concerns, Ms. Zargaran is concerned over unfair handling of her case by Iranian judicial authorities. She started her hunger strike on May 25, 2016.

She is serving her sentence in the women’s ward of the notorious Evin prison. As part of her protest she has also refused to accept visitors, which prompted her inmates to do the same in her support.

Despite her dire need for professional medical care, prison authorities have refused to send her to a hospital outside prison facilities for proper care. Ms. Zargaran underwent a heart surgery about nine years ago and needs frequent medical attention.

One of her family members said, “Maryam hasn’t left her bed in four days. She is burning with fever and has been on hunger strike to raise her protest against prison authorities’ indifference toward her health, her request for temporary release or leave which every prisoner is entitled to.”

This source also mentioned she had filed an appeal which has been dropped from her case without her knowledge.

Maryam Naghash Zargaran is a 36 year old Christian believer who was arrested in the winter of 2013 for her faith and arbitrarily charged with “action against national security”. She was summoned to the intelligence office on January 6, 2013, where she was put under temporary arrest for three days. After initial interrogations, she was transferred to Evin prison and her case was sent to the Revolutionary Court.

An initial court in Branch 28 of the Revolutionary Courts, sentenced her to four years in prison for “propagating against the Islamic regime and collusion intended to harm national security”. Later, an appeals court approved this sentence. Ms. Zargaran was instructed to report to Evin prison to serve her sentence. She reported to Evin prison on July 15, 2013, and has remained there ever since.

Iranian judicial and security authorities have repeatedly tried to make up false allegations against Christian converts to pressure them and to distort public opinion about them. Most of these false allegations are political and argue that house-churches are actually political groups which are in contact with or spy for foreign countries like England and Israel. In most of the Christian cases, Iranian authorities try to downplay the religious aspect of these cases and make them appear as political cases, in order to unmercifully sentence them and avoid international pressure. |

Voice of the Persecuted Note:  On May 29th, Maryam’s blood pressure suddenly dropped and she fell unconscious. She was then transferred from prison to the hospital. Sources claim it took a few minutes before she was able recognized her relatives who came to see her in the hospital. Though she desperately needed to stay in the hospital, she was taken back to the prison without proper treatment. This sister needs our help.

As with other cases that have drawn international attention and outcry, we have seen prisoners receive better treatment and even released by the Iranian regime. Let us not be idle and act quickly. Please PRAY and SPEAK OUT for our sister suffering in Iran.  SIGN THE PETITION for the Immediate & Unconditional Release of the Imprisoned Christian Convert Maryam Naghash Zargaran. Share this story and encourage many to sign the petition.  Be her VOICE!

HELP SAVE THE PERSECUTED

Together with your generous help, we can reach the goal to alleviate horrific suffering. In darkness and desperation, let us serve in love, with open arms and giving hands to provide light and hope.

Every day, we thank God that He is working through you to care for His children and to further His Kingdom! As you greatly bless others, may God continue to bless you. Thank you so much for your support. We couldn’t do it without you!
You may also send your gift to:

Like Loading...
‹ The World Wide Web-Prophecy, A Tool Of Satan? Or Wonderful? Choose Wisely
” Disciplined And Obedient “ ›