Home › anti-christ › Iran Releases Hostages For Obama? Or Is God Showing His Hand By Choosing The Day

Iran Releases Hostages For Obama? Or Is God Showing His Hand By Choosing The Day 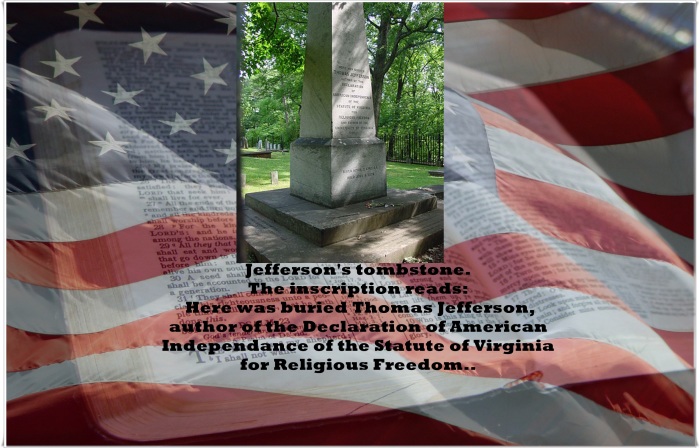 I want to expand on a little known fact or little reported fact.  January sixteenth is a special day for America.  It’s special for America as it was founded on Judeo Christian Values, and was founded as a country that would respect a Freedom to worship God without Government interference.

National Religious Freedom Day commemorates the Virginia General Assembly’s adoption of Thomas Jefferson’s landmark Virginia Statute for Religious Freedom on January 16, 1786. That statute became the basis for the establishment clause of the First Amendment of the U.S. Constitution and led to freedom of religion for all Americans.

Religious Freedom Day is officially proclaimed on January 16 each year by an annual statement by the President of the United States.

Now you don’t have to wonder why these prisoners weren’t released a few weeks earlier.  It was Christmas.  A time when the world celebrates Christ’s Birth.  But God chose Jan. 16, to show His hand, to show that He is God.

So Obama can stand as he did this morning and proclaim what he did, but God chose this day, God moved for His people to be released.  God moved to free innocents from the clutches of evil just as He did in Egypt, with the Israelites.  And before you say that Muslims were freed with Christians so this is null and void.  God does not want any to perish but all to come to him.

Prayers of the Saints were sent to the Throne of God not only for Pastor Saeed but for all held hostage in a dark and sinister place.  Yes, Iran is still dark, not because of it’s people but because of the dark powers that rule in that land.  The Bible even speaks of the darkness in this region.  There has been spiritual darkness in this region since the time of Daniel:  The prince of the kingdom of Persia withstood me twenty-one days, but Michael, one of the chief princes, came to help me, for I was left there with the kings of Persia…….So he said, “Do you know why I have come to you? Soon I will return to fight against the prince of Persia….. Daniel chapter 10.

As we witness prophecy unfold in this region, we should pray for God to protect His people and the innocent.  And remember God is calling His people to come out of “Her”.  As prophecy unfolds our prayers should increase, prayers for strength, courage, and protection for our brethren and for us.  I believe we are about to see prophecy explode.  Are you ready?  Put on the Armor of God and get in His word.  Time is running out.