Home › Africa › Religion Or Politics Or Both? Nigerian Elections Less Than 2 Weeks Away & Christians Stand The Most To Lose

Religion Or Politics Or Both? Nigerian Elections Less Than 2 Weeks Away & Christians Stand The Most To Lose

We’ve watched Goodluck Jonathon’s governance from a distance.  We’ve reported in the past about the pressure from the west for Jonathon to instill more Muslims into his cabinet.  There was even for a short time pressure for him to negotiate with Boko Haram as the west insisted at the beginning that they were just suppressed, oppressed people who needed a voice in their government to satisfy them.  What a load of propaganda that turned out to be.

Nigeria Seeing Shift In Politics Of Religion Ahead Of Vote

Lagos (AFP) – Less than two weeks from national polls, Nigeria’s ruling party is facing unprecedented shifts in the politics of religion that could spell trouble for the incumbent, President Goodluck Jonathan.  via Nigeria seeing shift in politics of religion ahead of vote – Yahoo News.

Now that the election is less than 2 weeks away, besides the obvious concerns about the hundreds of thousands even millions of people displaced by Boko Haram, there is new concerns.  Concerns about religion.  Even Christians have abandoned Jonathon in favor of a muslim contender (4 time contender).  Buhari has a very checkered past as a General who ruled with less than stellar morals. 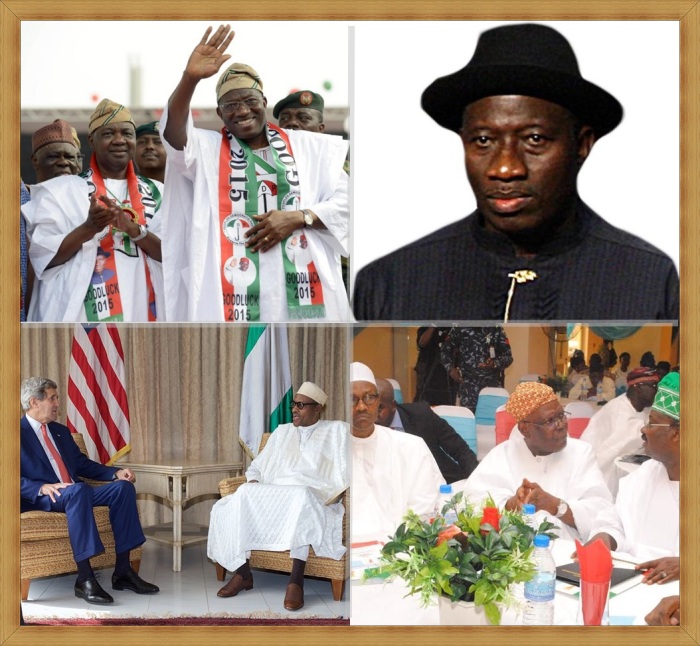 This article about the shift in politics of religion is true.  We have verified it with those on the ground.  They say “this is absolutely true, Majority of Christians are not interested in the Jonathon administration because they believe that he has failed them.   And the major reason is, he gave all the political key offices to the Muslims and they were the one controlling his administration.”

We reported back in April 2014 about the possibility of corruption in the Jonathon administration, and where the west was pressuring him to renounce his loyalties.

Given the recent escalations in the attacks from the Boko Haram, we have to ask why.  When you look at the big picture of the history of the government in Nigeria, and the events of the recent past, with the firing of top Generals and who they were replaced with, you have to ask was this done to placate the Muslim population?

Or is there pressure from international leaders, including those in the west to form a coalition government with Muslims in power, similar to what is taking place in western nations?  In fact he had this to say after a heinous bomb attack in Abuja that killed over 70.  “We console with our country men and women, we will continue to work very hard.  The issue of Boko Haram attacks is quite an ugly history within this period of our own development.  We will do everything to make sure that we move our country forward.  These are unnecessary distractions that are pushing us backward.”   (More)

Now that Boko Haram has claimed more territory than ISIS, and is carving out a Sharia form of government for themselves, I can see why Christians are disillusioned with Jonathon. But there has been just as much negativity reported about Buhari. Below is one of many videos about Buhari’s past.  Pray for the people of Nigeria, for them to have Knowledge as they choose a leader to lead them out of this darkness, and not fall for a false promise of peace and prosperity.

Some facts about General Buhari:

Remember what everyone in the West forgets is that the Christians of Nigeria are suffering an ethnic cleansing of genocidal proportions.  Pray for Nigeria.