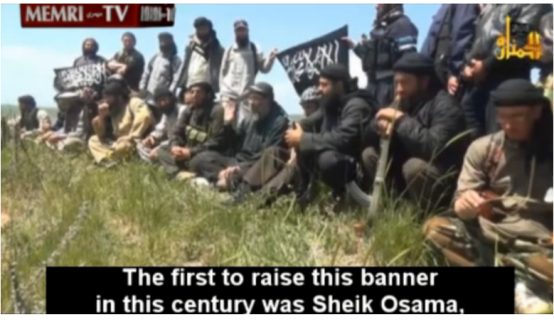 In a video released by the group and translated by MEMRI on Friday, the militants are filmed walking through an olive grove in the Syrian Golan Heights carrying weapons and a black flag, with gunshots in the background.

Crawling through trenches, the fighters then come upon the bloodied corpses of soldiers which appear to be from Syrian President Bashar Assad’s forces, which they dismiss as “bodies of Alawite Army” troops.A cleric associated with the militia can then be heard expounding on the religious nature of the Syrian conflict, reiterating Jabhat al-Nusra’s commitment – along with other extremist Sunni groups allied with al-Qaeda and fighting Assad’s Hezbollah-backed forces – to combating Shi’ites, “Zionists” and “Crusaders” — possibly a reference to Jews and Christians, respectively — “occupying Muslim countries.”The fighters are then seen taking over a former Syrian Army post, planting their black flag on the hilltop as the chant “Allahu Akbar,” or “God is great,” echoes in the background.A senior religious authority in the militia, Sami al-’Uraydi, then praises bin Laden for “raising the banner” of militant Sunni Islam and heralding “the age of great wars,” which began with the 9/11 attacks and will culminate in the coming of the Islamic messiah, or mahdi.“Thanks to Allah, the banner has been raised. The first to raise this banner in this century was Sheik Osama, may Allah accept him in Paradise. The banner passes from on lion to another, from one man to another, until it will reach Muhammad bin Abdullah, the Mahdi,” MEMRI quoted al-’Uraydi as saying.Bin-Laden was subsequently praised as “the lion of Islam, sheikh of the mujahideen,” a term referring to Muslim fighters engaged in holy war.“I pray to Allah to accept him in Paradise, and reward him for the Jihad, and for raising the banner in this century. Amen. By Allah, my brothers, this scene reminds us of Sheikh Osama in the mountains of Tora Bora, with Sheikh Ayman al-Zawahiri and the other sheikhs by his side,” another cleric could be heard saying.