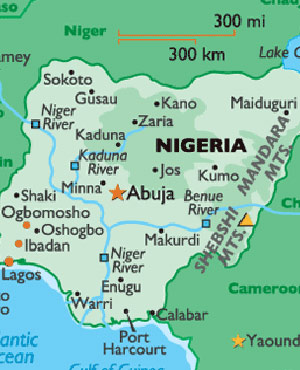 CNN is covering the kidnapping of 234 school girls.  (Here) But for the most part the Mainstream Media refuses to show the wrathful, atrocious, malicious, reprobate acts carried out against innocent people in Nigeria.  The daily lives of Christians and other religious minorities have been decimated and reduced to chaos, and uncertainty.  Uncertain whether the sun will set or rise without the heinous shedding of innocent blood.  These conflicts in Africa are spreading their darkness, the blackness grows, and with it comes the demons called Boko Haram, Al-Shabab, Al-Queda, Seleka, ‘Lord’s Resistance Army’, Anti-Balaka, and all other rebel groups that share the same evil codes.

The media refuses to investigate the corruption of the governments in these places, the blatant ignoring of the slaughter and kidnappings by the government there and here in the west, goes largely silent. (More)  They should be raising alarms and red flags and asking tough questions.  Questions & concerns that are valid and need addressing in order to uncover the darkness that lives here.

The toll this is taking on not only the innocent, population, but on those attempting to aid the victims, is reaching proportions not seen since WW2. The beheadings, and executions, alone are enough to cause even the seasoned war veterans to go mad. And yet these people witness this every day.

We have talked with people on the ground and it’s unimaginable what they have to endure. These images will mark them and walk with them the rest of their lives. They say that their faith in God is the only thing that sustains them. Recently an aid worker delivering clothes and other aid to victims was gunned down. His crime? Attempting to provide relief, a little comfort in a ravaged region, some clothing. Imagine that. Those who are brave enough to go into the middle of slaughter are gunned down. They put their lives at risk daily just to provide comfort, and these malicious demons slaughter them.

Then there is the hundreds of school girls that were kidnapped. The unspeakable terror that they are facing is heartwrenching. The parents of the girls say that the number is 234. Yet where are the armies looking for them? Where is the outcry from the UN? Where is the outcry from the West? We know the history of these evil groups and why they kidnap young girls and children. The girls are raped and forced into slavery among the rebels, and they are the fortunate ones. The boys are forced into serving as militant soldiers in what can only be described as the devils army. And they too are used as sex slaves and in prostitution. Pedophilia runs rampant. They are psychologically tortured, and forced into martyrdom. Innocent children, that should be worried about what they will wear to school, or what their grades will be this semester. Instead they are forced to endure torture beyond human capabilities.

The international community needs to highlight and draw this to the attention of their governments, instead of covering it up or ignoring it. Something must to be done.  As we saw in Rwanda and also what we are seeing in the CAR, a genocide has already begun— as we sit comfortably here in the West feeling as though nothing ever touches us. Atrocities are taking place on a catastrophic level. While the West worries about prom dresses, dance recitals and ball games. Minute by minute, the children in these countries are facing rape, torture and death. How much longer will you remain silent?