Home › views › Commentary by CJ › ‘Wake up America,’ says family involved in BLM cattle dispute: What Is This Really About? Turtles Or A Water & Minerals Grab

‘Wake up America,’ says family involved in BLM cattle dispute: What Is This Really About? Turtles Or A Water & Minerals Grab 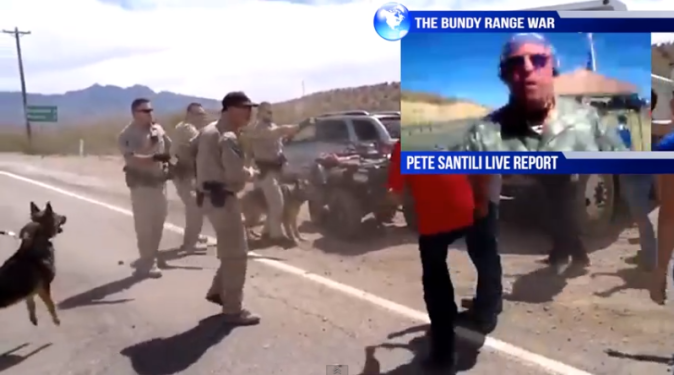 This story has been developing for several days.  This is absolutely insane.  This is not the first time that the BLM has taken cattle from Ranchers forcefully.  It is however increasing in craziness.   This particular case has been in the courts for a while, I understand that the BLM is concerned about a tortouse?  that may become extinct,  what concerns me is the continuous pattern we see that Federal law is taking over State Law.  In this and many other areas.  This is very significant.

“Wake up America. Look what our ancestors fought for and we need to stand up for that. We need to realize what’s happening. They are taking everything away from us. This isn’t only about one family. This is about everyone’s family.”

Evidently the family had parked on the highway to film the BLM taking their cattle, and they didn’t like it, so they arrested him.  The family said they beat him, had dogs on top of him and stood on his head.  They did release him a couple of days later, but since when is police brutality forgiven?  Since when is this the normal?  The last time they did this was in 2001 I believe.  They did the same thing, taking cattle from a rancher they accused of trespassing on the BLM land.  They actually seized the cattle and sold them at auction.  (More)

Here’s a latest video that sums it all up, and I agree with the Bundy family ‘Wake Up America.’  This land grab is about more than turtles.

Like Loading...
‹ Christians In Pakistan: Facts That Go Unnoticed By Western Media: Unnoticed Or Ignored
French Natives Under Attack, Muslim Caliphates Within The Border Of France ›