Home › news › “Where Has The Backbone Of America Gone”

“Where Has The Backbone Of America Gone”

True Christianity of the written word of God has taken a back seat to corruption and Sodom and Gomorrah Morals! We have a President peddling the ungodly acts of sexual immorality by telling people they need to be more accepting of the sin of same sex marriage as the Pastors and Priests invite into their buildings the lewdness at the Altars across America by marrying what God has not ordained as Holy!!! Common sense has obviously left America when a persons mind set can be so twisted into thinking that two people of the same sex are blessed by God as they keep their bibles closed and collecting dust so they don’t have to read this: “For this cause God gave them up unto vile affections: for even their women did change the natural use into that which is against nature: And likewise also the men, leaving the natural use of the woman, burned in their lust one toward another; men with men working that which is unseemly, and receiving in themselves that recompence of their error which was meet (fit). And even as they did not like to retain God in their knowledge, God gave them over to a reprobate mind, to do those things which are not convenient. Who knowing the judgement of God, that they which commit such things are worthy of death, not only do the same, but have pleasure in them that do them”.(Romans 1:26-28,32).

Now if anyone wants to live outside of the righteous ways of God be my guest, but if I am not out there shoving sin in your face then no one has that right to do that to me in the name of a Holy God I serve! The President has the right to abuse his authority if he wants, but I too have the right to say I will do as God directs ant true Christian which is we are to Love what he Loves and Hate what he Hates. “For they speak against thee wickedly, and thine enemies take thy name in vain. Do not I hate them, O Lord, that hate thee? and am not I grieved with those that rise up against thee? I hate them with perfect hatred: I count them mine enemies. Search me, O God, and know my heart: try me, and know my thoughts: And see if there be any wicked way in me, and lead me in the way everlasting:.(Psalm 139:20-24). 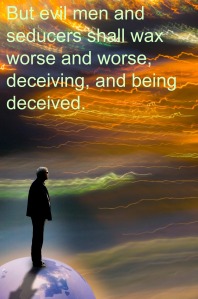 Lets read what the trials of the last days will be like and see how parallel it reads to our day and age……..”This know also, that in the last days perilous times shall come. For men shall be lovers of their own selves, covetous, boasters, proud, blasphemers, disobedient to parents, unthankful, unholy. Without natural affection, trucebreakers, false accusers, incontinent, fierce, despisers of those that are good, Traitors, heady, highminded, lovers of pleasures more than lovers of God: having a form of godliness, but denying the power thereof: from such turn away”.(2 Timothy 3:1-5).

When God’s Judgement is fully released on the world who will be able to stand? God himself has said the Priests have not stood on his word and they do not put any difference between right and wrong, we see this today as the Pastors and Priests allow same sex marriage at their altars and it saddens the heart of God to see those who say they are the ones that stand for his Holy and Righteous way’s as they marry full blown sin at the Altar! “Her priests have violated my law, and have profaned mine holy things; they have put no difference between the holy and profane, neither have they shewed difference between the unclean and the clean, and have hid their eyes from my sabbaths, and I am profaned among them. The people of the land have used oppression, and exercised robbery, and have vexed the poor and needy: yea, they have oppressed the stranger wrongfully. And I sought for a man among them, that should make up the hedge, and stand in the gap before me for the land, that I should not destroy it: but I found none. Therefore have I poured out mine indignation upon them; I have consumed them with the fire of my wrath: their own way have I recompensed upon their heads, saith the Lord God”.(Ezekiel 22:26,29-31).

There is time for repentance to those who have realized the error of their way,and to those who continue in their sin will of wished this message did not come to pass, But God is of his word and no one knows when his tipping point will cause him to move toward his wrath he has foretold us of !