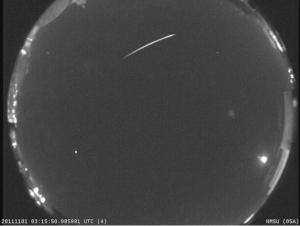 (A still image of a North Taurid meteor that was captured at New Mexico State University.)

(Text Via LA Times)  The flashes and bright lights that were reported across Central and Southern California on Wednesday night likely were long-lasting meteor streams known as the South Taurids, according to the National Weather Service.

The Taurids are known for having exceptionally bright meteors. On Wednesday night, people used Twitter to describe what resembled a meteor shower, bright lights or fireballs in the sky.

Mary Slosson said she driving eastbound on the 10 Freeway when saw a “flareup” that “looked like something burning up upon entry into atmosphere” over the Culver City area.

The flash of light caused drivers to hit their brakes and swerve to catch a glimpse, Slosson said.

Another person in Hollywood said he saw what appeared to be a “pretty substantial fireball in the sky.”

In northern San Diego County, a woman said she saw the “sky light up super bright.”

And in Fresno, a woman said she “saw something that looked like a huge shooting star falling.”

English: A fireball Geminids falling earthwards. The Draconid meteor shower is expected on October 8, 2011, and may feature up to 1000 meteors falling her hour, according to some astronomers. Almost all meteors burn up and disintegrate long before reaching the surface of the Earth. (Photo credit: Wikipedia)

Like Loading...
‹ Significant Report: Saudi nuclear weapons ‘on order’ from Pakistan
The Mother of All Secrets – Pastor Mike Hoggard ›

Categories: news, Signs in the sun moon and stars