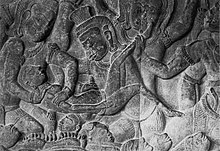 My Comment & photo:  This photo is from Wikipedia it show’s a demon inducing an abortion by pounding the stomach of a woman with a pestle.  So tell me again, what abortion is.  And we have seen proof of abortion rights activists chanting ‘Hail Satan’ as they protest.  Wake Up!!!

Text by:  (CNSNews.com) – Unborn babies who have reached at least 20 weeks of age in utero are aborted at a rate of about 30 per day in the United States, according to the Congressional Budget Office.

The CBO has also concluded that aborting babies at 20 weeks or later in pregnancy saves money for the government-run federal-state Medicaid system.

The CBO made these determinations when doing its official “Cost Estimate” of a federal bill that would prohibit abortions at 20 weeks or later into pregnancy (except in cases of reported rape, incest against a minor or to save the life of the mother).

“Based on data compiled by the Centers for Disease Control and Prevention (CDC), CBO estimates that, each year, about 11,000 abortions take place 20 weeks or more after fertilization,” said the CBO’s analysis of H.R. 1797, the Pain Capable Unborn Child Protection Act.