Home › Prophecy › The Day Of Pentecost

The Day Of Pentecost

As Israel celebrates Shavuot,(which we believe in also) the day they received the law from Moses, we Christians are in remembrance of the birth of Christ’s Church, in the day of Pentecost.  When God sent the Holy Spirit to the Apostles.  This is a little celebrated Holiday or day of importance with Christians and it needs to be given more attention.  This is not only the day the Christian church was born, it is the day the God sent power and His Holy Spirit to all believers.  He is risen!  He is Alive!  And He comes to us in the Holy Spirit!

Acts 1:6-11  ‘So when they met together, they asked him, Lord, are you at this time going to restore the Kingdom to Israel?  He said to them:  ‘It is not for you to know the times or dates the Father has set by His own authority.  But you will receive power when the Holy Spirit comes on you; and you will be my witnesses in Jerusalem, and in all Judea and Samaria, and to the ends of the earth.’  After He said this, he was taken up before their very eyes, and a cloud hid Him from their sight.’  While they were standing there looking up at the clouds 2 men dressed in white stood beside them, and said:  Men of Galilee, why do you stand here looking into the sky?  This same Jesus, who has been taken from you into heaven, will come back in the same way you have seen Him go into Heaven.’

Acts 2  ‘when the day of Pentecost came, they were all together in one place.  Suddenly a sound like the blowing of a violent wind came from heaven and filled the whole house where they were sitting.  They saw what seemed to be tongues of fire that separated and came to rest on each of them.  All of them were filled with the Holy Spirit and began to speak in other tongues as the Spirit enabled them.’ 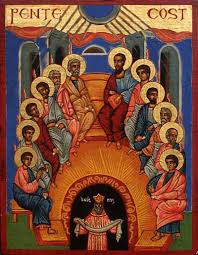 When the Jews heard this noise they were surprised and came to see what the noise was, can you imagine what they must have thought when the disciples spoke and each person heard them in their own language?  About 3,000 were saved and baptized that day!  What amazing power the Holy Spirit has.

You can read the whole story of Pentecost in the Book of Acts beginning in Chapter 1.  And there is a short definition below from Wikipedia.

Pentecost (Ancient Greek: Πεντηκοστή [ἡμέρα], Pentēkostē [hēmera], “the Fiftieth [day]”) is the Greek name for the Feast of Weeks, a prominent feast in the calendar of ancient Israel celebrating the giving of the Law on Sinai. This feast is still celebrated as Shavuot. Later, in the Christian liturgical year, it is also a feast commemorating the descent of the Holy Spirit upon the twelve Apostles of Christ.

Among Christians, Pentecost commemorates the descent of the Holy Spirit upon the Twelve Apostles and other followers of Jesus as described in the Acts of the Apostles 2:1–31.[2] For this reason, Pentecost is sometimes described by some Christians today as the “Birthday of the Church.”