“Please remember to pray for the people of the philippines” 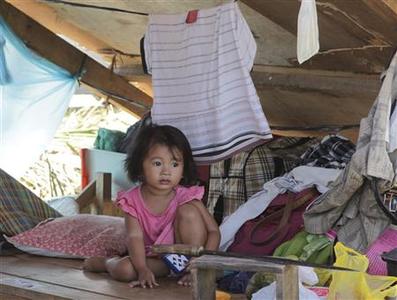 (Reuters) – Isolated communities in the Philippines including hill tribes are facing hunger a week after a typhoon struck, and with roads blocked, supplies will have to be dropped by air, authorities said on Tuesday.

Typhoon Bopha killed 714 people and caused crop damage worth 10.3 billion pesos ($250 million) when it hit on Tuesday last week. Nearly 900 people are unaccounted for and about 2,000 were injured, the national disaster agency said.

The most intense storm to hit the disaster-prone Philippines this year wiped out communities near the coast in the southern provinces of Davao Oriental and Compostela Valley.

But villages inland were also hard hit by floods and landslides and many are cut off. The Philippines has asked for help from allies and the private sector to get help in by air.

“Their food is fast dwindling, their roads are blocked by fallen trees and boulders and it will not be long before everyone in these upland villages will go hungry,” Manggob Masinaring, a member of a mountain tribe and a volunteer relief worker, told reporters.

Compounding the problem was that the source of water for many villages had been blocked or polluted by mud and debris.

“The streams, which are their only source of water, are too murky for drinking,” Masinaring said.

International agencies including the Red Cross and World Food Programme have appealed for nearly $100 million for food and shelter for 5.4 million people affected by the typhoon. Nearly 400,000 people lost their homes and farms.

Major-General Ariel Bernardo, the army division commander in the south, said food and other supplies would have to be dropped by helicopter to the most isolated communities, including hill tribes, who had yet to be reached.

Stephen Anderson, country director for the World Food Programme in the Philippines, said help had to be delivered fast to communities that had lost everything — homes, crops and all “productive assets”.

“These people are extremely vulnerable … it’s a race against time,” Anderson told Reuters.

The Philippines had asked the United States if it could de help with its ships, planes and helicopters, said Benito Ramos, executive director of the national disaster agency. Britain had offered to send two heavy-lift helicopters, he said.

Private companies and individuals were also being asked to help with their helicopters.

via Isolated Philippine typhoon victims running out of food | Reuters.