Sharia mandates that adulterers be stoned to death, so this panchayat must be made up of moderates. “Lashed to death: Bihar panchayat executes woman for adultery,” from Dailybhaskar.com, December 4 (thanks to Sreekanth):

Purnia(Bihar):In an incident reminiscent of Taliban-style execution, a woman was whipped to death in Bihar’s Purnia district last week for adultery. According to eyewitnesses who didn’t wish to be identified, the Tiyarpaya Panchayat held Bibi Shehzadi guilty for having an affair with a relative, and ordered a death penalty.

Nobody in Asiyani village protested as they saw Shezadi being beaten to death.

The panchayat, headed by sarpanch Zaki Ahmed, had earlier given a dressing down to the victim for her role in starting a self-help group for women of the village. The SHG, reportedly provided solace to women of the community who suffered from emotional or physical trauma.

Some, however, claimed that Shezadi was pronounced a death penalty as a retributive measure, for her husband had contested against the sarpanch in the civic polls last year. Her husband, Md Munna, now works in Ludhiana, and couldn’t be reached for a comment.

“ASP Deepak Barnwal had been asked to ascertain the exact cause of the woman’s death,” said Amit Lodha, superintendent of police, Purnia while speaking to a newspaper.

No arrests have been made in the case so far. 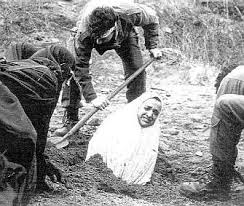 Categories: Human interest, Persecution of women in the middle east, Religion of Peace